A frozen kingdom, problematic aquatic vampires and some wood munchers

Birthplace of the serial killer, rapist, kidnapper and necrophile, Ted Bundy: the city of Burlington, VT is a bonus stop off on my way through New England.
Accepting a free ride, almost accidentally into the Northeast Kingdom, I find myself in the state of Vermont. Over the last week I have seen some solid, northern, populated areas amidst the frozen north. Vermont’s state capital, Montpelier contains large, tough looking, multi-cultured buildings inspired from various periods over the last couple of centuries, yet breathes a somewhat relaxed air and has a laid back, social atmosphere, especially when the Boston Bruins win at Ice hockey. 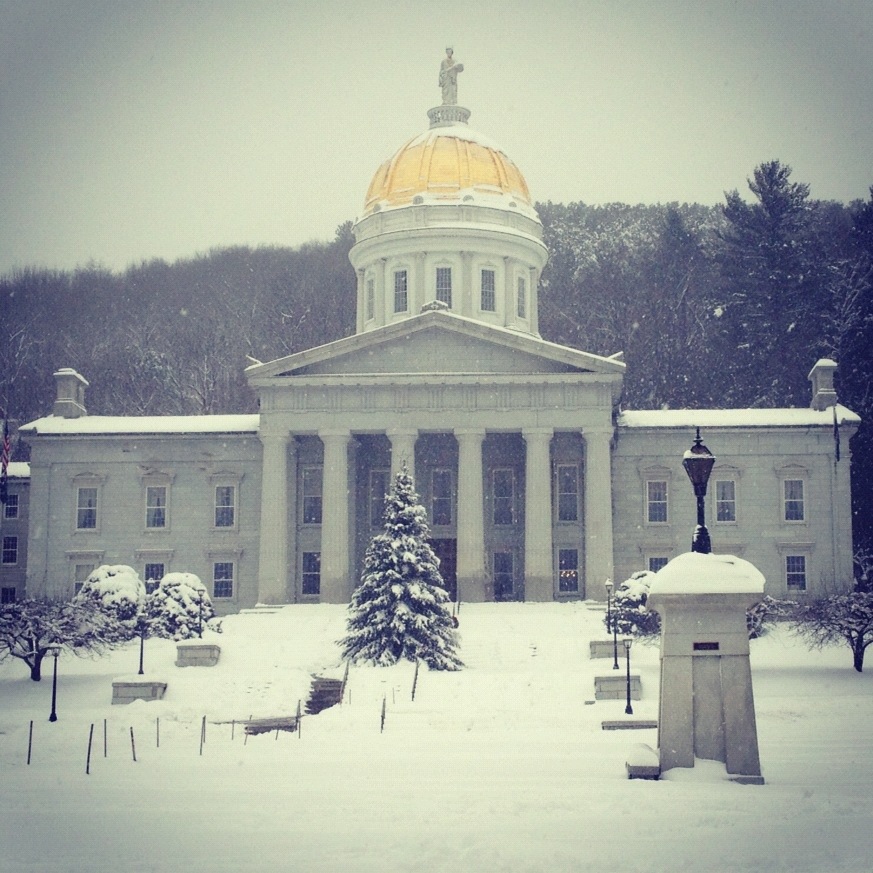 The back drop to these populated areas in an almost forgotten part of the US, is mile after mile of neighbouring farmland and forest. Strewn across the vast, nature-rich hills are frozen woodlands and sporadically placed, hap-hazard, large weathered houses in towns that look like they never quite acquired centres. Currently, dense white ground cover against clear blue skies to an undulating horizon, dusted with frosted trees, like icing sugar might seem idyllic, but more harsh weather and snow is imminently forecast.
It’s a fairly extreme scene as the winter clings onto life and refuses to hibernate. At the moment, with everything melting, it’s what locals call Mud Season. When the summer does arrive, Vermont shows its true colours. It is the Green Mountain state and no prizes for guessing why. It’s a lush oasis of agricultural farm land and is a beautiful temptress for all outdoor hikers. Vermont spills at the seams with “the good life” and she’s a treasure trove of sun-kissed hill sides and active nature. Now though, as breathtaking as it is, it’s a long, long winter and everyone is keen to see the back of it. 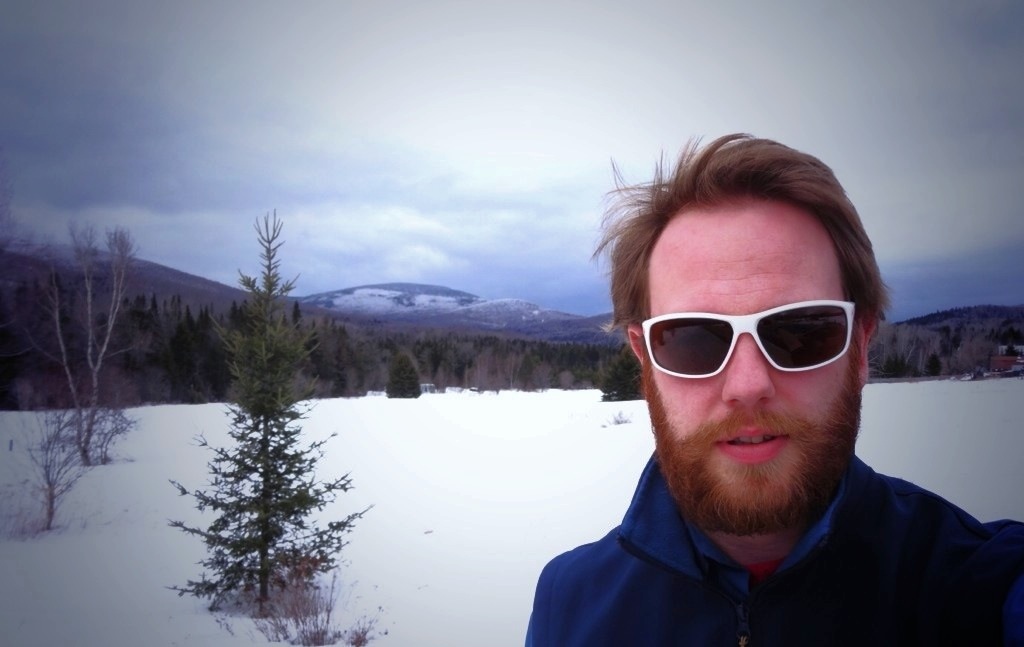 I grew a face scarf

I have been welcomed with warming, American hospitality and Vermont was no exception. Like convenience stores off every main road, VT overflows with more breweries per capita than any other US state and everyone I meet is so proud to gift their favourite local ale to a perceived, knowledgable beer drinker. I guess us Brits also have our reputation..

Agriculture is life, business and a heritage in Vermont. However in Burlington, as with the other large cities and towns in new England, there are numerous universities and alumnus; you can almost feel the education, awash on the streets…or at least see hundreds of students.
On arriving in bustling Burlington, which sits proudly on the east side of Lake Champlain, I accepted a free ticket to see the amateur theatre production of Les Miserables. I wasn’t disappointed, although listening to it being sang in American accents was a new experience.

Evening view over Lake Champlain, from the top of a University of Vermont fire escape

On March 6th 1998 Lake Champlain became America’s 6th Great Lake. However, 18 days later it lost its “Great” status, something which some locals are, I think a little bitter about. Champlain is full of fresh water and roughly 120 miles long, 14 miles across at its widest point and 120 meters deep. Right now, although it shouldn’t be, it is frozen. People have been ice fishing on frozen water all across New England since I arrived, standing out on the lakes, drilling holes, dropping lines and catching supper. On parts of Lake Champlain, the scenes are the same. The lake is a dominant feature in the landscape and a dominant factor for life in the area as roughly 250,000 people need Champlain as their main source of drinking water (don’t miss read that). Discussing with a graduate student that had just visited a water treatment facility, one particular plant was proud to be disposing of water into the lake that was actually cleaner than the lake itself. However, I wasn’t able to find out how clean the discharges were from the other sixty, Vermont-based, municipal and industrial sewage plants.
Although there are pollution issues (mainly concerns over phosphate accumulation), it is safe for swimming, fishing, boating, water fights and washing your feet in. Although casting a line onto the ice from the bank would be futile right now, Champlain is considered a world-class fishery for salmonid species (Lake trout and Atlantic salmon) and bass. However, the tasty species are under threat from lampreys (a suction fish that feeds on other fish, much like a large leech). Pesticides are used in an attempt to control the problem, but as with so many other things that are taken for granted, Americans are at risk of falling off a very fine knife edge and losing some of their natural produce that they have become so accustomed to enjoying. 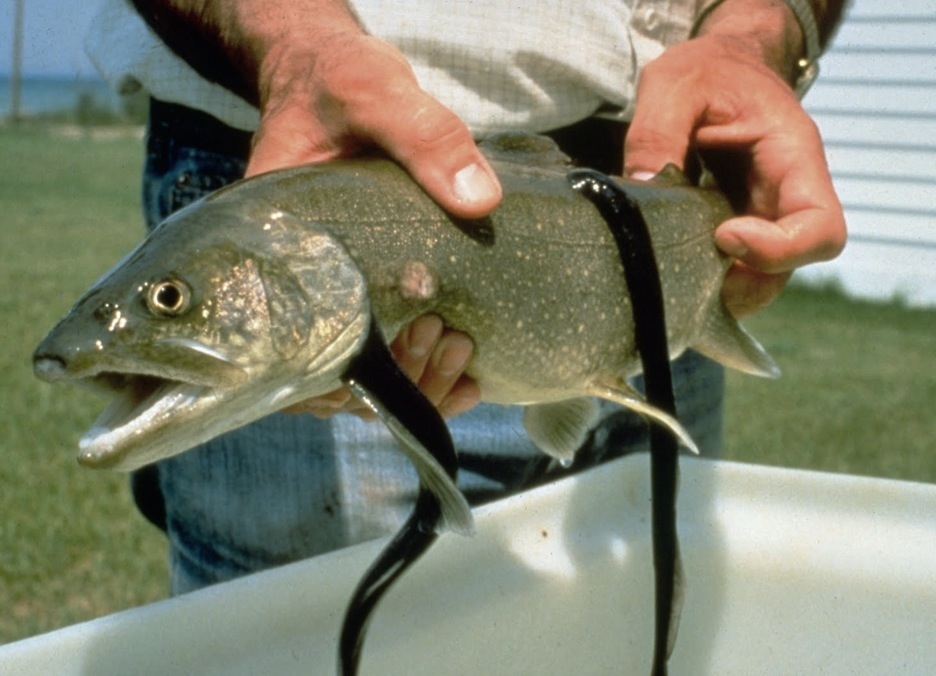 You might think that it’s no surprise, this is the destructive, American, consumer nation after all. However, many naturalists, bio-scientists and graduate students are working hard for the government to try and make sure that the US isn’t without such typical things like bananas, citrus fruits and hard woods. Florida is one of the biggest producers of oranges in the world. This is what the New York Times has written in 2014:
“Florida’s citrus industry is grappling with the most serious threat in its history: a bacterial disease with no cure that has infected all 32 of the state’s citrus-growing counties.”

50% of America’s hardwood trees are currently being eaten from the inside due to an Asian, Emerald Ash Borer beetle, – they aren’t easily detectable and when they are found, its too late for the tree. The wood is useless. 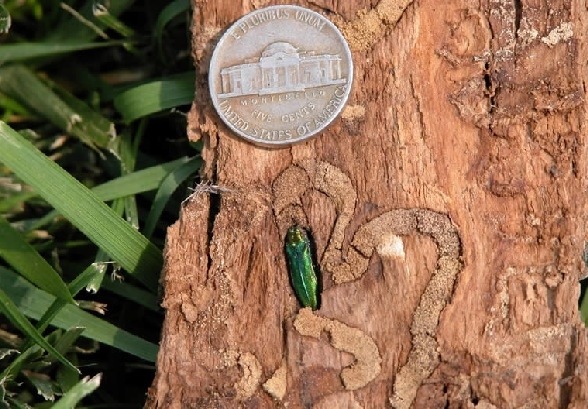 Next week I’m meeting someone who is working on reintroducing the American chestnut tree population – an epic and wonderful achievement if it can be realised, but one that would possibly match the reintroduction of woolly mammoths onto the icy tundras of Siberia (also currently and controversially pending). We might have eradicated the chestnut wood from America’s forests, but the blame for a lot of the current issues cannot rest solely on America. It’s easy to throw accusations at countries that have “interesting” relations with the US, because they are where many of the bugs and diseases have come from, but foreign trade has led to many species arriving onto US soil that now, cannot be ignored for risk of losing such vital agriculture.

I find it fascinating. Imagine America without bananas, without oranges, without hardwood to make anymore furniture or houses. Take these issues just one step further and imagine the US without corn! Although possibly, positively shaking up the food industry, these are real issues (ok, not the corn….yet) and in order to avoid losses in the very near future, people are working on them now. I’ll hopefully be looking into the hardwood problem soon.

As for Lake Champlain, over 80 fish species live, socialise, commute, work and enjoy their public holidays in the Lake, with more than 300 bird species also relying on it. Many of them have summer homes here and utilise the lake whilst on migration.

Lake Champlain is mainly bordered by the states of Vermont (east) and New York (west), but it also spills over the northern border into the Canadian province of Quebec. Although currently frozen, in the summer it becomes a giant swimming pool. Humid summers in Vermont are not uncommon and who doesn’t like a dip in a monster-infested, freshwater lake. Indeed they have their own version of Nessy and the monster is even the mascot of the state’s minor league baseball team.

Not the Champlain monster…or is it?

As the lake freezes in many places during the winter, there is some call for an ice highway across the lake instead of ferries running on sometimes the only stretch of unfrozen water. There is also some eco-concern as, instead of maybe migrating, ducks flood the only unfrozen sections of the ferry crossings and in doing so, make themselves easy pickings for hungry eagles through the cold winter months. Large numbers of rare duck populations are simply being eaten and unfortunately getting used to living in the literal wake of humans.

Prior to 1972, the infamous pesticide DDT was used in the US and Lake Champlain couldn’t avoid it’s effects. Acting like the Black Death, it was successful in permeating through the exoskeletons of bugs to rapidly reduce their vast numbers. However, it also caused cancers and tumours in small mammals, caused the thinning of egg shells in birds, rats became infertile and humans were naturally accumulating DDT in their systems. Studies are still ongoing to find out the effects on humans, but many questions have been asked over its link to human cancers; breast cancer in particular and problems with breast feeding. DDT was responsible for eradicating the population of cormorants from ALL north American lakes in the 1940’s to 1950’s, quickly removing influential links in the food chain. Efforts are being made to reintroduce black crowned night herons, cattle egrets and great blue herons, all of which disappeared during the years of DDT use. India, China and South Korea still use DDT and it was also semi-effective at eradicating malaria in some countries that chose to use it. However, even though some African nations have explored its use, some Mosquitos have developed an immunity. Before vilifying the Americans for their destructive pesticide use, us Brits were still using DDT up to 1984.
Historic processes such as the use of DDT and provoking books like Silent Spring by Rachel Carson (1962) are the reason huge environmental movements have been sparked across the US. There are universities devoted to biological and environmental sciences, creating a very large and relatively new, green, Eco-savvy section of society, especially in New England. 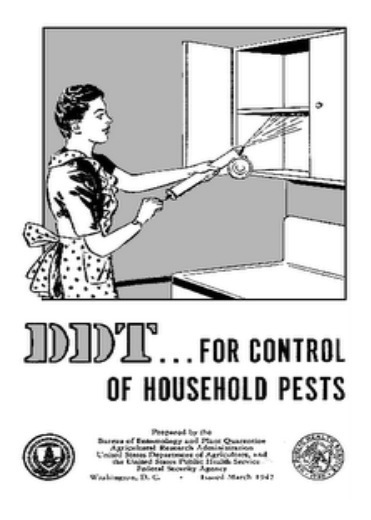 To rid your house of pests…move house!

On a different note, there used to be four significant railroad crossings over Lake Champlain, but as of 2011 there is only one. Unsurprisingly, the “floating” rail track from Vermont to New York was abandoned in 1918 due to a number of locomotives and rail cars slipping into the lake. Although too early to call on Isambard Kingdom Brunel for some engineering know-how, his father, Sir Marc Isambard Brunel did construct a canal between Lake Champlain and the Hudson River. Maybe they should have asked him about a floating rail road…

Happy Easter everyone. Next, The Empire State. New York, baby!