Avoiding the freeze (and city), some sensational breasts & a brush with wood 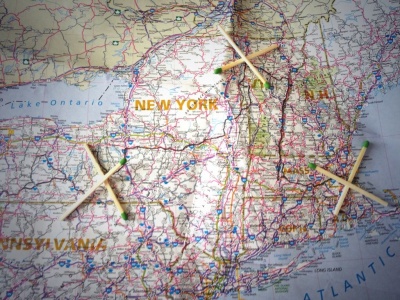 Scorn me with your judgemental eyes if you wish, but I have no interest in New York City. I am however, in New York (yes, it’s not just a city). Feeling like I do about London (it is one of the greatest cities on earth); if you come to London and see many of its attractions, you have still not “visited” Britain. Working on that logic, I have therefore visited New York. I see you, rolling your eyes, but bear with me. If all that comes to mind is a city when New York is mentioned, read on my dear fool… Even though New York is relatively a small state, there will be two New York instalments as I have simply been lucky enough to have traversed most of its mid and north areas. Some New Yorkers don’t like to be referred to as “upstaters”; it’s like people in Birmingham being called Northerners by people in London; by the same people that have travelled north to Watford and think they’ve travelled the equivalent of north of the wall in Game of Thrones.

It turns out people from the state of New York don’t carry the same stereotype as those that dwell in the Big Apple. As cool as NYC might be, us Europeans are educated with the notion that New York City is full of complete a**holes and weirdos. Controversial I’m sure, but since arriving I too have been blessed with a new Native American middle name, “Sweeping Statement”. Despite the significance of New York City (which will not be mentioned again) New York state is dominated by farms, forests, rivers, mountains, lakes and as I have witnessed each day since being here, world-dominating chipmunks. I can use the word “world” to make them carry more gravitas than they actually do, even when it is only relevant within the US. Americans do it all the time….”World Series”, “World’s best Christmas shop” (Yankee Candle), “The worlds best ham” (As advertised by Harrington’s)…I could go on but I can’t help but feel that many comparisons have been overlooked, and that the advertisers may have been misinformed about where America ends and just how much of “The World” there is elsewhere….that also makes some pretty impressive Christmas paraphernalia.

Disappointingly, I couldn’t reach New York’s Adirondack Park. Walking out into the frozen mountains, west of Lake Champlain didn’t seem like a wise idea without knowledge of its paths, adequate winter equipment and extra time on my hands. The Adirondack Park is larger than any other U.S. National Park in the contiguous United States (excluding Alaska) and is home to much of the wildlife I am so desperate not to miss (but may now have to wait to see in Yellowstone in a few months). Had Spring been on time and not a month late, getting over the mountains could have been more interesting than my next sentence. Situated in the Adirondack mountains is Lake Placid, which hosted the Winter Olympics in 1932 and again, in 1980. Quickly putting my disappointments aside and looking forward to the trail ahead. I reached Ithaca. A well known, fairly progressive and liberal college town, home to ivy league Cornel University, host of many waterfalls, a relaxed, educated and organic-loving community who are again, proud of their local culture and happy vibe. New York State, much like its neighbours from New England, also doesn’t disappoint when it comes to brewing beer on the front porch. 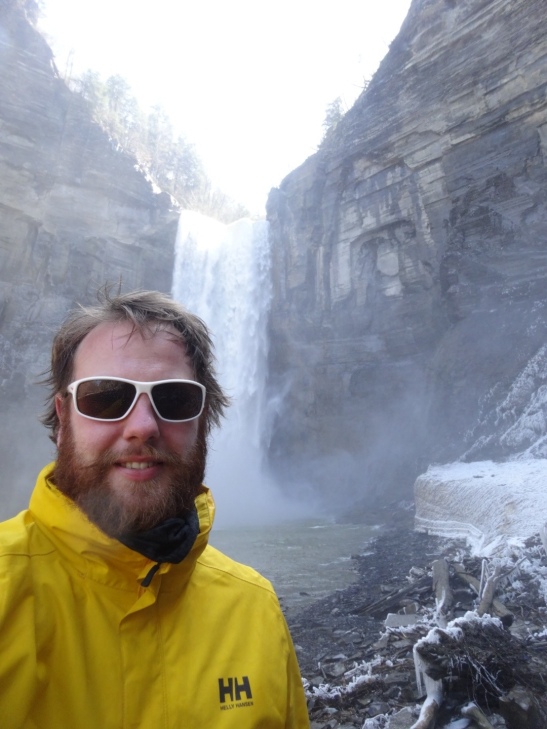 I was introduced to my host through a friend of a friend in Vermont and on arrival at Katie’s front door was instantly handed a local beer which literally tasted like fairies had crawled inside my mouth and started their own bluegrass festival. Nothing more needs to be said. As it happens, Katie is majoring in conservation biology, focusing on plant pathology and specifically hop management. New York hop agriculture has recently been devastated by disease and Katie, vitally, is going to keep the state and no doubt the country, wet. I have not met anyone more passionate about great beer and was treated to an ancient, cobwebbed bottle that Katie had acquired at a “release day”, (where breweries set a date to release their special brews). 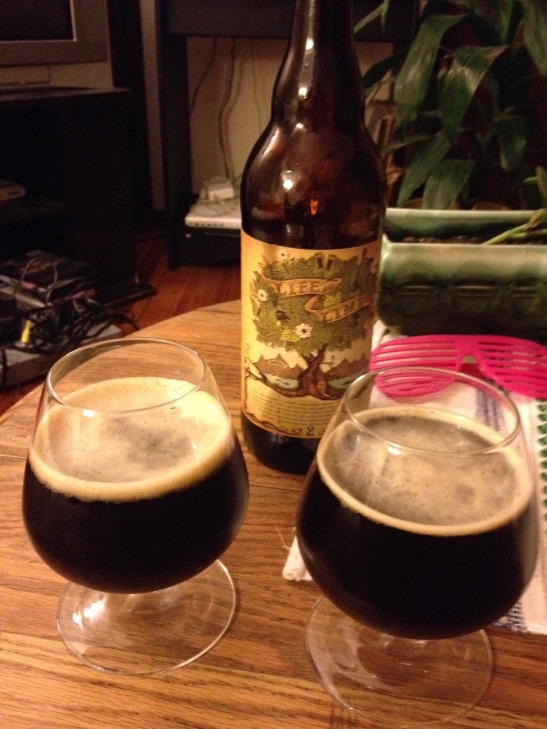 The USA also has an “underground” beer trade-network (humour me on this), where people from across the country gather to trade beers. Most micro brewed beer is not available outside of its neighbouring states. It would be like Bristolians swapping beer with people in Cairo and arranging to meet in Italy, or trade discreetly through nationwide websites. Although legal, as no money exchanges hands, reselling it through websites like Craigslist and eBay has resulted in serious trouble…as one lady found out in 2012 by reselling five cases of The Alchemist’s, Heady Topper (Vermont) beer for $825! I can vouch for the beer though…it really is a party in your pants. 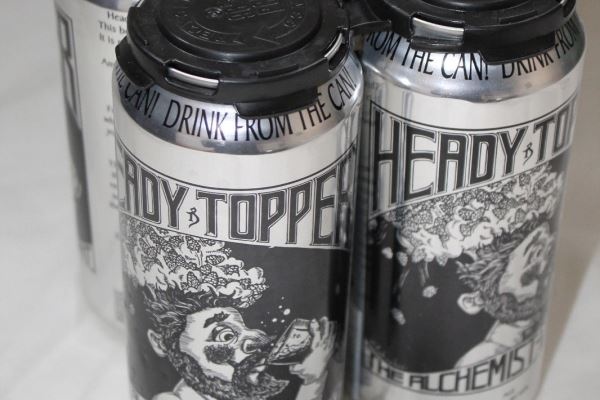 As a gimmick, they tell you it should be drunk from the can

Eager to explore the waterfalls and nature trails, we, or rather Katie, made my plans….I made dinner. The comfortable couch was mine, but we would be road-trippin for a day to spend Easter with Katie’s “completely-typical, Simpsons-style and possibly reluctant-to-host-a-hobo, family” (I’m quoting Katie on that. I wouldn’t be that rude!) Of course I joined them! As I haven’t technically reached the state that we drove into yet, more of that later. However in summary, if you ever have the opportunity and can supply her with road snacks, allow Katie to give you a beer and make plans for you, you might even get to see snakes making passionate, evening love in the bushes, as I did. Losing miserably at the Cornel trivia night was satisfying; scoring only a couple of points against some of what appeared to be the most advanced minds at the Ivy League college – while they wrote their essays at the same time as the quiz! The team I was invited to join went down in the sole satisfaction that even though we might not have been able to answer the questions on rocket science, quantum physics or obscure research carried out in Minsk in the 70’s, we did know something that they didn’t: the name of a female donkey – in your face, Geeks! Admittedly, only one of us knew that answer and it wasn’t me, however the local ale was only a couple of dollars (funny Katie should know that) and the popcorn was free. The prizes for the winners were probably rubbish anyway…I’m not competitive…at all. 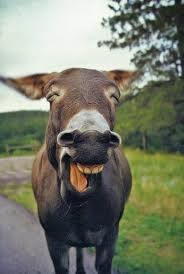 On a spontaneous afternoon in Geneva (all dwellings here have names stolen from Europe, it’s complimentary and possibly lazy…and they could have just asked the natives for the names), I was introduced to (apparently) a US staple: “Beer Can Chicken”. Alien to us refined diners in Britain, but definitely a cooking method that I will be unleashing onto the British public, here is the simple process. Essentially, just rub a raw chicken with selected spices, then stuff an open and half-drunk can of beer up its bum. Roasting it in an enclosed barbecue with beer or brandy-soaked wood chip is the preferred method of heating and probably safer/cleaner than risking a beer can explosion in your oven. Who says Americans aren’t innovative chefs? Kudos however to the cook, your breasts really were fabulous. 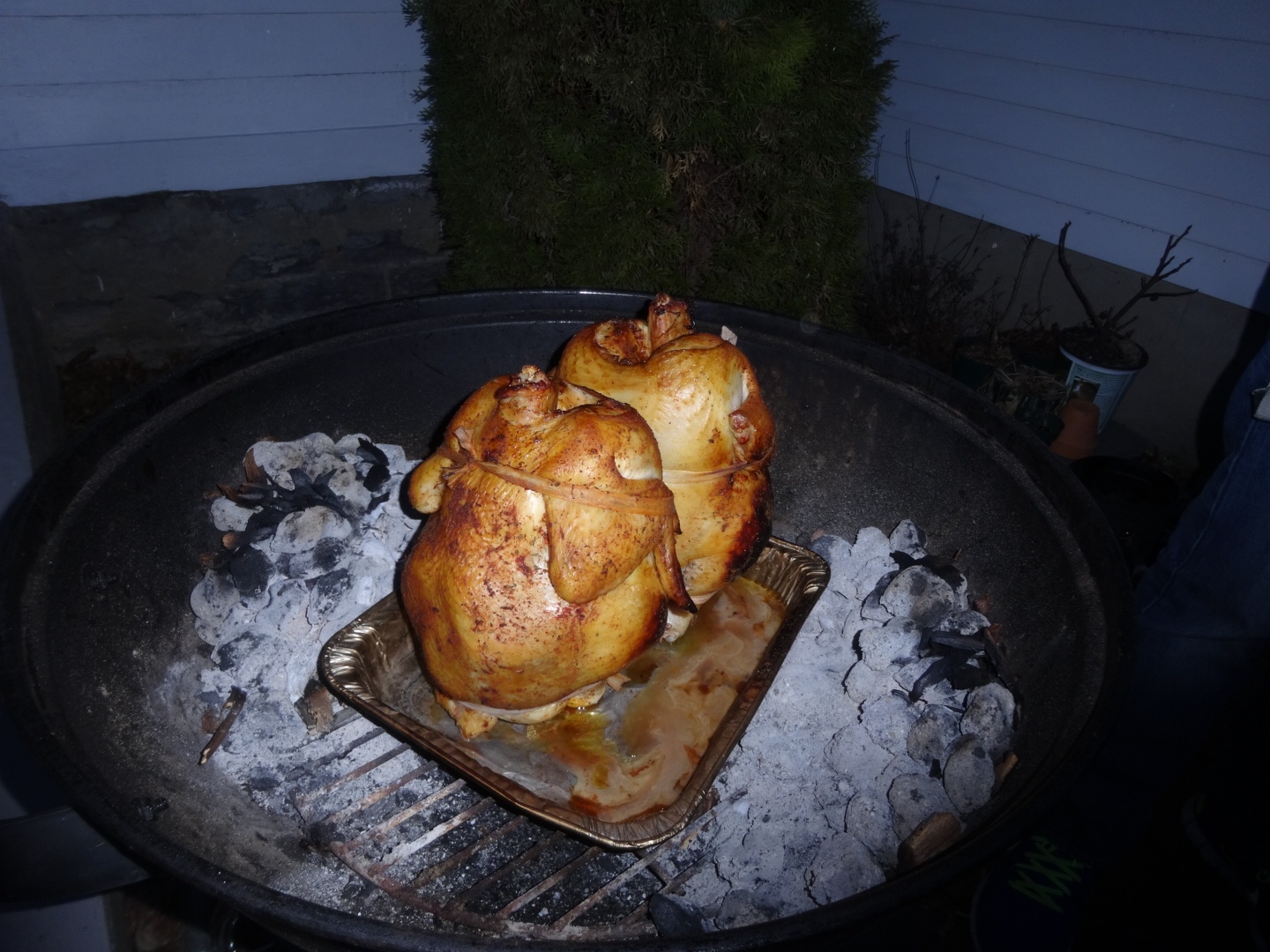 Insert your own alcoholic chicken joke

After being introduced to a young family living on their, “work in progress”, century old farmstead in Marietta, near Skaneatles, I was quickly put to work to earn my keep. Spring was almost here so Andy had been busy trimming his bush and his wood was dispersed all over his yard. It was my pleasure to help out with some gardening and cooking whilst they let me sleep in the part-renovated attic. Well, it was, until I splintered myself and had some sort of reaction to sap all over my arm while out in the yard. Whilst cutting my shins on fallen trunks and grazing my knuckles on old wood, there is always a risk of poisoned oak, ivy or sumac irritation in the states. However, fairly resolute that I hadn’t contracted anything and wouldn’t require hospital attention, I topped myself up with antibiotics, cleaned myself with alcohol wipes, then chugged a stiff whiskey from my mason jar. Whilst driving a tractor and watching the turkey vultures circling overhead (I’m sure they could smell my bleeding limbs), I actually felt slightly nostalgic, getting to grips with being a traditional, American farm hand…and I had only moved a bit of brush around around whilst naively touching some unpleasant wood. 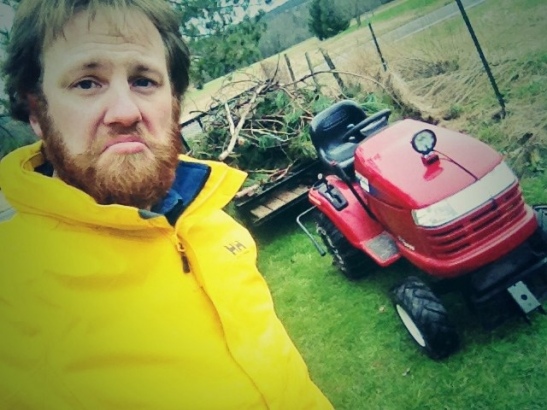 In the Finger Lake region of New York, Onondaga and Skaneatles Lakes are barely 20km apart. Onondaga (in the north west area of Syracuse) was and is recovering from being one of the most polluted lakes in the world following decades of horrific, chemical waste disposal directly into it from local, booming industry. Skaneatles Lake however, is one of the purest lakes on earth and supplies the city of Syracuse with their drinking water from roughly 20miles away. Oddly however, Skaneatles Lake does not supply the towns on its banks. Classic American engineering and common sense combined. It is worth mentioning that I’ve never seen clearer lake water on any of my travels. Although visiting Lake Malawi last year, renowned for its pristine, clear fresh water, Skaneatles was clear for up to 30ft down, even on a dull day. Only the salt waters of the barrier reef have really outshone Skaneatles in my eyes.

I was treated to fish and chips whilst on the beautiful lakeside, and may have even imagined myself back home for a moment, on some picturesque British shoreline or in some greasy village chippy. However, I couldn’t quite manage it as the fish was breaded, not battered, and even though it was a stirling effort, it wasn’t quite home.

Our stereotypical, British fish and chips

Despite my lack of walking updates and nights of camping, I have been on foot for days when pitiless drivers haven’t offered me rides, and I can confirm that ALL of my camping equipment has been tested, sometimes in freezing, lunar conditions that I wish I had avoided. Next week, Thousand Islands, a haunted house and onto Niagara Falls!