Numerous Breakages, some Peaceful Solace and a Murder

Roughly four miles north of Custer in South Dakota, off a dirt, logging road, amongst the stumps of a raggedy pine forest in the Black Hills, was where I found a small pice of American solace. 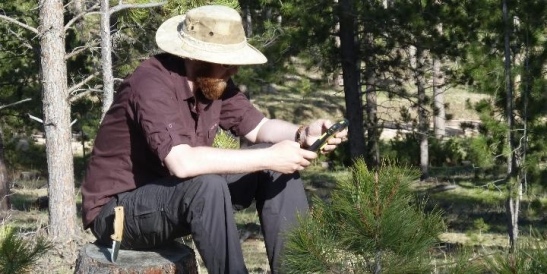 While exploring and foraging amongst the forested back roads for an interesting place to camp, my old friend KP reversed the truck over something which slashed a two inch gash into the side wall of one of our rear tyres. I have now exchanged multiple flat tyres on three different continents and have learnt one thing – when it is not your car, it is never a five minute job. It became interesting when the lever for the carjack bent, almost splitting into two pieces and we couldn’t raise the truck high enough to attach the spare wheel. Grateful for a local chap to drive by, who I flagged down by flashing my pasty legs at, I think I was thankful that he was blinded, rather than interested. Either way, he stopped to at my signalling.

With his barely understandable thick American drawl, the maybe not-so- local chap got down on his hands and knees and helped jack up the truck with his more industrial-looking equipment.
Some sweaty moments later, after a mucky handshake and a grumbled exchange of gratitude, we were on our way in the knowledge that an extra day in the woods would be required, in order to locate and replace the broken rubber. 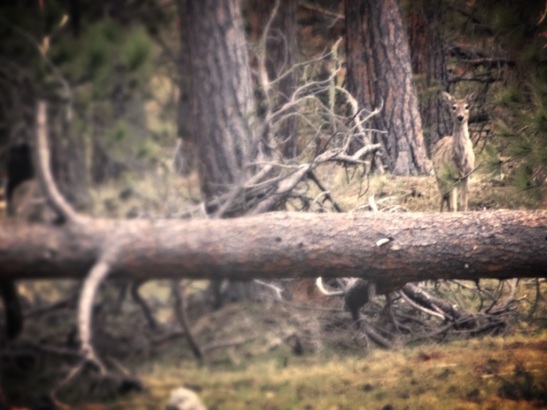 A few miles north of the beautiful Custer National Park, the camp spot was quiet, the birds seemed absent and probably because it was too cold for mosquitoes and other bugs to be hatching out. There were deer and rabbits socialising around camp in the sunshine that speared through the pine canopy, I saw numerous long tailed weasels, turkey and what I assume were yellow bellied marmots shuffling their disco dance moves around the craggy rock formations. I didn’t manage to take a photo, but they were reddish brown in colour, about the length of a badger, too squat to be a fox and were constantly running around the large granite and quartz boulders on the outskirts of the forest. I only hesitate to say they were yellow bellies, because I thought they lived at much higher, colder altitudes. If they were weasels, they were bigger than your domestic cat!

Not far from the seemingly small and nature-filled, Wind Cave National Park, the camp spot also had an aroma and eerie monotone from an old, leathery western movie.
Maybe it was the fresh dew each morning, the chocolate chip-like scat pellets of various critters, the freshness of the new green growth; or maybe it was all of that mixed with the decomposing deer carcasses near by, the burnt tree stumps, the composting carpet of needles or dead pine trunks sticking perfectly upwards towards a sun that no longer aids them, but the woods held an ora of quiet solace, of a mystical disposition and an eerily empty yard of nature for this time of early spring. It seemed a little too quiet. It was however comforting and even with the cries of coyote though the nights, it felt like a haven slowly awakening. As a result, I think I would like to buy some woodland.

Around the Black Hills, on the outskirts of Wind Cave and the stretched, grassy slopes, dozens of buffalo, thousands of prairie dogs, a few pronghorn, quiet mule deer and minions of easily spooked, white tailed deer were common. Delighting my senses on an hourly basis as I sat, and strolled around the woodland edges, more nature wondered by. On my penultimate morning in the forest, I also spotted a magnificent sage grouse!

Whilst we waited for a tyre to be delivered, as navigator I decided we go on a small 120mile road trip…without a spare tyre. Taking the “sensible” route, we drove from Custer, to the cowboy town of Deadwood, down Spearfish Canyon and through the motorcycle haven of Sturgis. Vanocker Canyon was a splendid road trip on our way back to the haven in the forest, and one recommended for any biker.

The final morning in the woods was a celebration – of completing two months of my travels in North America. I felt some serious partying had to be done…so I ordered a large ham and vegetable omelette breakfast in Custer, with unlimited coffee. I had forgotten how much coffee effected my bowels, and was repeatedly bursting for the bathroom for the rest of the morning!
As we waited for the tyre to be replaced and fitted, KP and I also celebrated reaching the Black Hills after covering a couple of thousand miles. As it had taken us a while, KP rejoiced and celebrated by changing his underwear, and the short-sleeved shirt he had ripped while we jacked up the truck just a few days before. It was quite a morning for us both and KP tallied up his little incidents since I had started navigating him through life…a broken rear window on the camper after reversing into a shady spot in Badlands, a broken rear tail light, a damaged camera, broken spectacles, a slashed tyre, a decimated passenger side mirror which he used to see the wide angles around his truck (my eyes were now his eyes, and had replaced this missing trinket), a ripped shirt, a dent in the camper bodywork and some shady wiring that needed to be done within the cockpit of the truck.
What’s a little adventure without a few breakages? Oddly, none of them were mine..

On the last morning, I took a walk at sunrise and found a small deer carcass that had been ravaged and enjoyed by a few coyote the night before (there videos on YouTube). Licked clean of blood and fluid, all internal organs had vanished, the hyde and the remaining bones stripped of flesh and its spine and ribs ripped out and gnawed back to their pure white calcium. There wasn’t a single morsel wasted. If I was tanner, most of my work would have been done, I would have just stretched the hide.

From Custer, over the border into Wyoming, the roads turned to long, slowly winding, climbing, single lane, big sky beauties. I navigated to a dirt road on Bear Lodge Mountain. The camp spot was remote and a few thousand feet up, over looking the scenery, almost 360degrees around. It smelt of pine, and of Greek islands in summer, with wild sage and maybe thyme growing near by. There was snow on the ground and amongst the thick, short aspen trees, ice blocks were still melting. Watching an electrical storm moving thirty miles from the east, over us and then thirty miles to west, dinner that evening was not only wet, loud and spectacular, it was a little worrying that were were one of the highest notable objects for miles, and we were camping in a metal box.

Unexpectedly, the following morning I would be brought to tears…