Nature advances on my soul, Devilishly

Missing the sunrise after popping too many sleeping pills, meant for a lethargic start on top of Bear Lodge Mountain. After a rapid drop down to the valley’s bottom and a short trip bearing north west, the hazy shadow of Devils Tower appeared, and proudly standing in the vast, vibrant, spring-drenched valley.

On entering the protected area where Devils Tower boastfully appears from the earth, the size of her ora grew and the shadow cast by the sunrise stretched over much of the old, sacred, Indian land.

I always knew that seeing, touching, feeling and being surrounded by certain American landscapes would make me feel privileged, small, humbled and in awe of what powers created them. Solid in position above the pine trees, red cliffs and prairie, I was curiously overcome with emotion at how beautiful the postcard in front of me was.

I was reminded that the place was of high significance for the native Indians. There were signs asking people to not disturb or remove prayer blankets or bundles which were often tied into the trees, and rightly so. 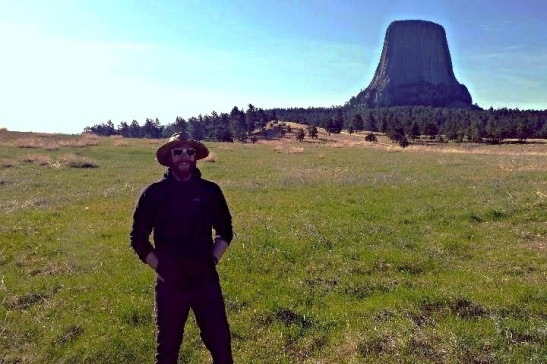 The monolith originally had many native indian names, amongst which some translated to Aloft on a Rock, Bear’s House, Home of Bears, Bear’s Tipi, Tree Rock and Grizzly Bear Lodge. It is a shame that we named it Devils Tower in the 1920’s due to a basic translation error, and in 2005 excuses over the possibility of poor tourism were made by the House of Representatives, in order to avoid changing its name to something more in line with its original, Bear Lodge status.
I enjoy names that originate from imagination, folklore, suspicion and outright craziness. It has such a cathedral reverence and feels like it should have a godly sense about it, but lets put creationism and geology aside, the massive rock was formed by a giant bear! Don’t shake your head in disbelief, it is true. A bear begins to chase a couple of young, tasty-looking girls while they are out playing. The girls run and sit on a rock, then pray to their Indian gods for help. Miraculously, (and maybe through a coincidental surge of molten lava millions of years ago) the children’s prayers are answered and the rock rises from the ground, with them on it. The bear claws at the rock, trying to climb and reach the girls so it can eat them. Thankfully for the girls, but unfortunately for the bear, he could not gain purchase on the tall, smooth granite face, and not for the lack of desperately trying, the bear missed out on his child-flavoured supper. The rock still has the giant bear’s claw markings down its sides and I assume the girls took a modern approach of abseiling down, of which many people still do. The details make perfect sense, and it also explains why Devils Tower’s original names are so, more appropriately accurate.

Surrounded by lush grass, the rich sounds and colours of nature, the serene, peaceful breezes through the pine trees and the humbling connection to the earth through this ancient, molten rock structure; I felt at peace. It brought emotion to my encounter and reminded me that experiences on this planet are never, ever as satisfying, as when those experiences are shared with the people we’re close to. The first National Monument, but more the surrounding landscape, brought me to tears.

No amount of photography, video footage or explanation will do my adventure justice. I was possibly unprepared for the overwhelming feeling I would get from simply being in a wilderness, but I welcome nature’s advances upon my humbled soul.

Apart from telegraph poles and a few sporadic farmer’s fields, the scenic route east, back towards the Black Hills was possibly the longest and most idilic drive of my trip so far. It is exactly the type of Wild West landscape I had dreamt of and I marvelled at the rugged rocks, jutting out of the lush, winding sides of the shallow sandy valley, which create natural barriers and red cliff blockades. Journeying through the hills as they rolled around the whole area like the tensed muscles on a dynamic, vigorous horse; the shacks, cabins and wooden, cowboy homesteads dotted on the map, drummed up scenarios of the historic west. Notions of what the early wildlings really had to contend with, threw romance out of the window and replaced it with tobacco chewing, leather wearing, horse riding, moonshine-making communities that roughly worked all their interactions with an eye on their baggage and a hand on their gun. Actually….that is romantic! The scenery was raggedly beautiful, unpolished and currently rich, but knowing how dry and arid things become in the summer under the scorching sun and big blue sky, it wasn’t hard to imagine the tiny wooden towns blistering, along with the flesh of the leathery locals.
This WAS the west that I wanted to see and the historic ora of Devils Tower made it all the more special.