Schoolgirl in the desert, dinosaurs and a hammer

After abusing Starbucks’ wifi privileges in Jackson WY, it was time to skip town. Just a few hours of volume in a populated area was enough to make me slightly angry – and for those that know me, anger does not occur on my emotional spectrum much. You would think after six years in London, I would be used to a little noise, but losing the hum for a few weeks was enough to reset my natural clock.

I danced very briefly with Idaho, but like an excited school girl playing hopscotch on American states, I skipped into Utah, stopped quickly to pick up my pebble as I travelled the length of the beautifully clear and blue, Bear Lake, and then jumped straight back into the south west of Wyoming.

Completely different from the north west, where the landscape was lush, mountainous, blanketed with pine forests and sprinkled, generously with mammalian, the south was dry, arid, brown and alive with lizards. I had reached the place in the USA where I would feel the furthest from home; which from northern Utah, the desert stretches a thousand miles south. It will be travelled across, and explored soon..

Fossil Butte National Monument was in my path, and if your vice is dinosaur bones, this was the first landmark on my journey east, through an archeologist’s desert dream. It was only a lunch spot, as the drive ahead would take at least a couple of days, but the landscape couldn’t have been more different from the one I had woken up in that morning.

Just north of highway 40, is Flaming Gorge National Recreation Area. More importantly, it was my first shower in almost two weeks. It also appeared to be one of those places completely off the tourist trail. Americans were camped here in their RVs for what appeared to be the entire summer. Their boats were not far away, and in their downtime men socialised by drinking and fishing…downtime is important and most found it daily. Maybe it was the time of year, but even though they were swollen from a late, winter melt, Bear Lake and Flaming Gorge waterway (it’s damned) were astonishingly crystal clear and a perfect lagoon blue. What these people did when they weren’t enjoying their fishing spots on paradise waters, was a mystery. It is many hours to drive to a nearby town, and work in the hot, dusty wilderness is not common. Not that I’m making any assumptions, but I wasn’t surprised to see very, very few females.

The drive south from Flaming Gorge was a nervous experience again for KP, but what’s a little adventure without soiling your pants once in a while? At high-altitude, there were steep inclines and sheer declines on a journey that thankfully, neither of us needed to change our underwear on. We stopped in Vernal to take a breather; it is times like these that the majority of english folk crave a cup of tea. Sadly, KP was not accustomed to calming his nerves with what the empire was built upon , so I made him a peanut butter sandwich. The drive east along highway 40 took all of KP’s energy, and a whole day. After a longer than expected stop in Dinosaur National Monument, I was surprised we made it to our destination before dark. 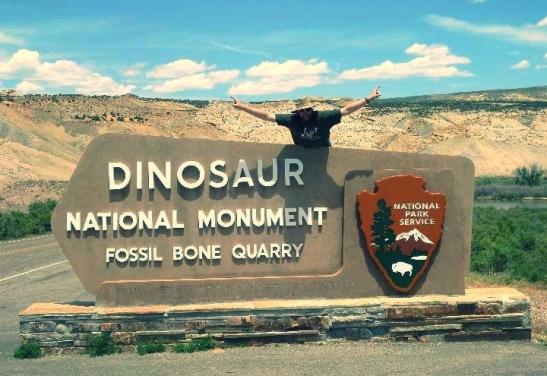 Dinosaur National Monument was simply massive, and nobody on my journey had ever heard of it, nor had I come across it in my research before coming to America. Granted, I didn’t look at Colorado or eastern Utah much as the areas were not on my original trail.

The monument has three entrances, one in Utah and two in Colorado. It spans about 100miles east to west and surrounds the convergence of the Snake and the Yampa River. I am not a huge fan of dinosaurs, but it can probably boast one of the best, original site, exposed exhibits of dinosaur fossils on earth (yes, even I this time, will go as far as to say it is probably one of the best in the world, but oddly at the monument, America didn’t).

The dry rock landscape fielding around the “prehistoric big-hitter”, it is just as breathtaking without the dinosaur exhibit, and the geographic scenery that surrounds you details over a few hundred million years in time. If you fancy a whole day of driving and seeing some rather remarkable, ancient skeletal structures and rock formations, I sincerely recommend it.

Tucked away at the most eastern end of the Utah section was Josie’s lodge. Following a divorce, she set up her homestead in the shelter of the magnificent gorge and lived peacefully, in renowned territory of bear and mountain lion. She chose this remote spot as her home; it would have been bitterly cold, below freezing for much of the winter, she was without electricity, plumbing, neighbours, and had at least a couple of weeks horse ride to a nearby town or hospital. Josie ranched alone for fifty years before dying at the age of 90.

The cabin is now merely tree trunks clad with mud and is slowly struggling to be restored. With some imagination, it is hard not to romanticise about the beauty and simplicity of her lifestyle, but her isolation reminded me of how much I miss not sharing my experiences with others. I certainly crave many aspects of self sufficient living, and surviving only on a respectfully modest amount more than what is necessary, but it still shakes my emotions every time I see people living as reclusively and as remotely as Josie.

Dinosaur National Monument was again, a bonus stop on my trek. For its size, it does well to maintain a conspicuous personality. A 25 mile journey off the highway at the western Colorado entrance gets you to the monument gate, and there are many more miles inside the park – it is never a short trip! A drive from a city, from east or west, really is a day’s outing, but it does mean that it’s rarely overcrowded. 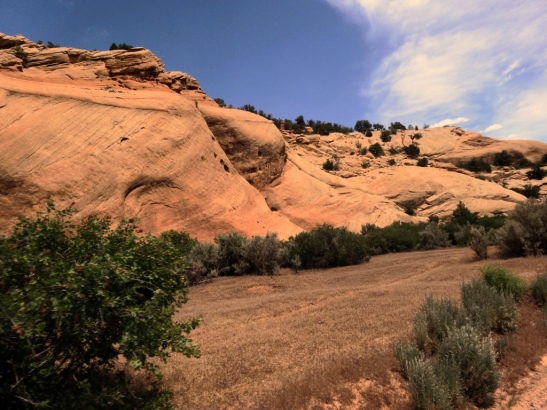 Seven hours later and after a long, straight, dry drive east, north of Steamboat Springs, is a little place on the map called Clark.

I cleansed my dusty feet in the Elk River (no I didn’t use soap or wash off any deet into the natural water). I was almost washed away by the chill of the teeth-chattering, fast-flowing melt water, but managed grab a tree trunk to avoid the embarrassment of being found twenty miles downstream. I did a little paperwork in the seclusion of the pine trees and managed to find a use for all the abundant sage bush – rubbing it over my smells. I think KP was appreciative, although he didn’t rush out to replace his deodorant stick.

The camp spot may have been a little louder with the swollen river rushing by, and it is clearly a recreational area for some locals to come and enjoy themselves, but it was one of my favourites. In spring, the flowers are everywhere; purples, pinks, yellows, and the trees are bursting with new growth. The ground is alive with wildlife and the lush, green grass is sporadically scattered with sparkling quarts in the setting sun.
The snow-covered Rockies are to the east and national forest surrounded me on both sides of the valley.

After an evening of wine, women and song…which I substituted again for some flatbread, vegetables (which were a treat), water, and a chilly night of interrupted sleep; the journey continued and I arrived a little sleepy, into the showerless refuge of Rocky Mountain National Park…