Snakes, Zombie farms and rather a lot about Voodoo

In New Orleans, I added my cultured yet extremely un-mingled racial profile into the hot pot of muddled human history. Choctaw and Houmas were the main Native American Indian tribes, until the French and Spanish colonial periods, and African slaves were shipped here in the 18th century. Even following the Louisiana Purchase in 1803 (when America bought the land from the French), and as settlers continued to move west, it is fair to say that New Orleans was always far removed from Anglo-Saxon New England. Now, as a flavourful stock pot of French, Cajun, Creole, Spanish, Native American, African, Mexican, multi-religious and tourist-rich influences which make up the unique American city, it remains uniquely removed in many ways.

One uniqueness that conjures up myth, misunderstanding, fantasy and spiritual intrigue, is Voodoo. Prominently referenced in a multitude of ways, it can be seen as a religion, cultural tradition, as an exploited, commercialised money maker, a tediously-linked yet fascinating (for some) section of the modern entertainment industry, as a lifestyle, and in art. Running through the pulsing veins of New Orleans, it is still practiced in sections of communities, and Voodoo traditions run deep into the legacy of the American south.

All over the world and throughout history, Christians have spread the word of their god through missionary work, and expected the people they invaded, exploited or enslaved to adopt their faith. The French colony of Louisiana was no different, and Africans were not only forced into slavery, but forbidden from worshipping in the ways they had done for centuries. Voodoo priests began incorporating their own gods alongside Catholic saints, and although appearing to be practicing Catholicism, Africans often turned to the familiar spirits of their ancestors to help them during their enslavement. Performing rituals using the items and imagery of the Catholic Church was confusing, and as with many historic, religious responses to lifestyles and spiritual practices which are foreign to their society’s norm, Voodoo quickly gained an unpleasant reputation.

White settlers came to associate Voodoo with the violence of slave uprisings, as well as embrace many unfounded rumours which demonised the spiritual religion. It became known for devil worship, animal sacrifice, torture, cannibalism and malevolent magic. Violence in places such as Haiti was extreme, and although Haitian slavery ended in the early 1800s, “Voodooists” were often persecuted by authorities. Eradicating native races was not the only thing on the agenda of many white settlers; foreign religion which arrived with African slaves was on that list too. Another tick in the box for the westernised freedom of American culture, racial equality, and for the forgiving/understanding nature of Christianity.

Although enslaved, persecuted, humiliated and misconstrued, Voodoo practitioners consider themselves Catholics, and some see the saints and spirits to be one and the same. However some use the Catholic accoutrements primarily for appearance, and keeping up appearances can often paint a vague picture. Although there are similarities, Louisiana Voodoo is often confused with Haitian Voodoo or southern Hoodoo: it differs in its emphasis upon Li Grand Zombi (snake deity), as well as things such as Gris-gris, voodoo queens, and the use of Hoodoo occult paraphernalia. It was through Louisiana Voodoo that Voodoo dolls were introduced to America, and due to the commercialisation and the association with all things sinister, these have misrepresented the faith ever since they appeared.

Most practitioners of Voodoo typically do not use pins or knives in Voodoo dolls and when they are used, they focus on positive ways of healing symptoms such as depression, stress, anxiety and loneliness. Voodoo is not a form of the Black Arts, and incorporates a karma system; using dolls to hex your disliked acquaintances is inadvisable and would have unpleasant karmic repercussions.

Voodoo is believed to originate from West Africa. Benin still has about four million adherents and it is also practiced in the Caribbean and South America. Sadly, with the extremely volatile end to the slave trade, negative propaganda linked Voodoo to the violence. It also vilified race-hatred, and in turn conjured up the sinister associations of bloody animal sacrifices, evil zombies, dolls stuck with pins, and naked dancers wrapped in snakes, shaking their possessed shapes in the shadows to the rhythm of African drums. I do wonder what African tribes would have thought of Christian hymns, had they stumbled into a church while trying to kidnap a country’s population to enslave them back on an African cassava farm.

Reputations are often deserved however – rhythm and dance are some of the many ways used to communicate with the Voodoo spirits. Africans obviously thought spirits responded better to funky, animal-involved, barefoot dancing to drum and bass, whereas Anglo-Saxons assumed singing relatively melancholy hymns accompanied by a large organ was often more appropriate. Unsurprisingly, with a Snake as Voodoo’s main deity, they feature in spiritual rituals, and as snakes are often seen as a deceitful symbols in other religions, it isn’t hard to understand how conclusions over Voodoo rituals were so easily misconceived. 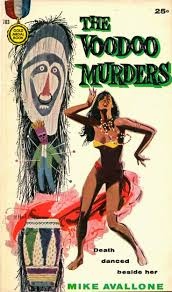 Voodoo likely evolved from ancient ancestor worship and animism, and although some rituals involve animal sacrifices, this is hardly unique – bloodletting is historically documented in Christianity, Islam, Judaism and Hinduism. 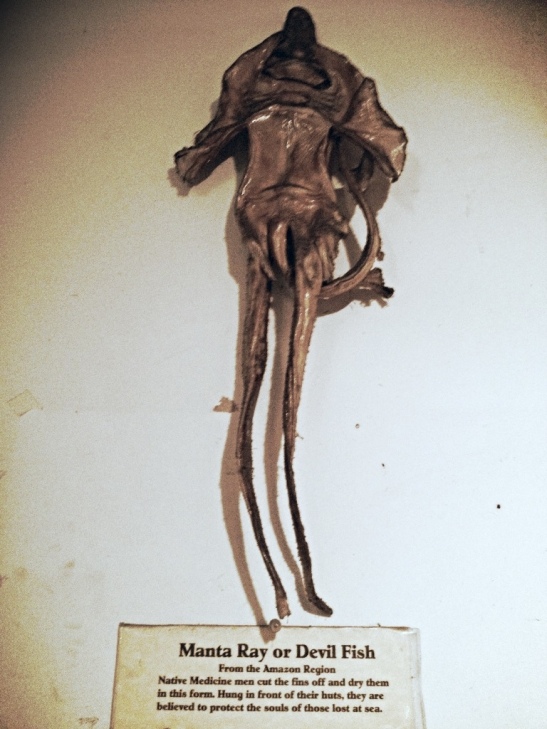 Voodoo is a guiding force in the communities where it is practiced and Priests are prominent and respected figures as they have strong connections with the spirits. They are expected to perform many social functions, and through music, dance, readings, prayer, spiritual baths, devised diets, and personal ceremony, spirits are called on to provide practical solutions to life’s problems – heal the sick, feed the hungry, help the needy, cure anxiety, addiction, depression, loneliness, and other ailments. Much like every other religion in the history of mankind.

The core beliefs of Louisiana Voodoo include the recognition of one God who does not interfere in people’s daily lives. Spiritual forces and the dead can be kind or mischievous, and are able to shape the daily lives of followers…much like your conscience. The Voodoo serpent represents “healing knowledge and the connection between Heaven and Earth”…which, in every faith, gives meaning to life. The main focus of Louisiana Voodoo today is to serve others and influence the outcome of life events through the connection with nature, spirits, and ancestors…much like tribal or Native American Indian beliefs.

The global phenomenon of zombies and the Voodoo element of animal sacrifice, are the more sensational aspects of Voodoo which are fine examples of how a religious element can be taken out of context.
Countless television shows and films have always succeeded to paint Voodoo as sinister and “dark”. Original zombies were not villains but victims, and were said to be people brought back from the dead (and sometimes controlled) by magical priests called bokors. The word Zombi simply described a human form after the soul had left the body. Zombification was used to strike fear in those who believed that they could be abused even after death, however I think even this was taken out of context as I read that zombies were even used as slave labor on farms. As much as I’m sure that some plantation owners would have wanted human forms, lacking self-awareness, intelligence or a soul working out in the fields, it is odd that I found no concrete evidence (in historic texts, or in person across America) of this actually happening!

Stripping sacred objects and rituals out of their original context for commercial exploitation is nothing new: Native American dream catchers made in China for sale at gas stations, or mass-produced African art or weapons sold online as “genuine imitations”. Unsurprisingly, Voodoo has also become a prominent part of the capitalising tourism industry in New Orleans. 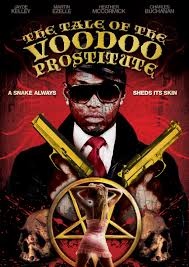 The commercialised, “Hollywood” Voodoo has again, misrepresented the faith and many fundamentalist Christians (and other religions) still regard Voodoo with suspicion; associating it with the occult, black magic and Satanism. Voodoo is often used as an adjective to describe something that is unknown, mysterious, and sinister, and in 1980 even George Bush famously disparaged Ronald Reagan’s monetary policies as “voodoo economics”. I imagine Reagan gained a few followers…

Voodoo has a largely undeserved, sinister reputation, and it is both ironic and unsurprising that it is best-known for its most sensational features. Although they have been rather tediously popularised, they have little to do with Voodoo practices or its belief system. The aspects of Voodoo which are so prominent in pop culture, are indeed extreme, but they are predominantly misconceived inventions to a) strike fear into non-followers (mainly the Christians who believed their faith should be followed by the people they enslaved) and b) stimulate “Hollywood” fantasy stories. I also find it ironic, that most Voodoo practitioners consider themselves (albeit not orthodox) Catholic. 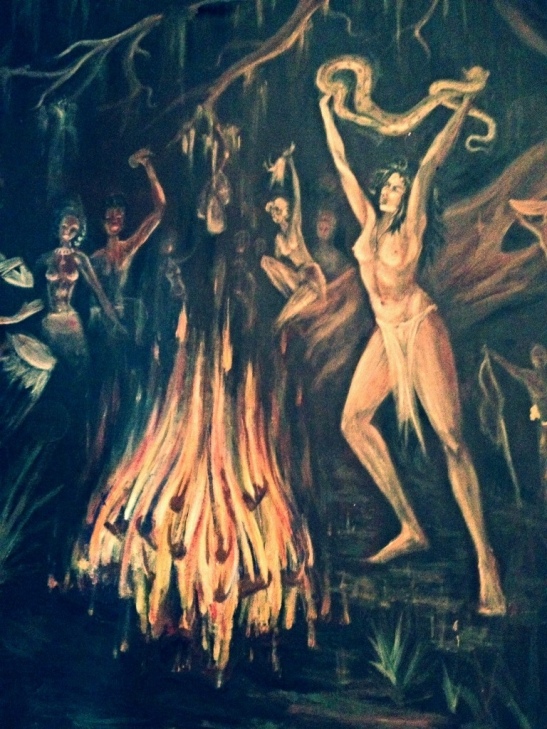 Next time you see a naked woman dancing in the dark by a fire cradling a snake above her head, you may want to pause (note that you’re not at the Burning Man festival), and think about her starving family or depressed husband, before assuming she’s lost her marbles and is about to jam scissors into the doll you think she acquired at the dollar store.