Nine months prior to me landing in Massachusetts, I had confidently prioritised the main, natural check points on my route. I was saddened that, on this trip to the USA I would not be visiting the area on earth which I considered to be the most nostalgic and certainly the most romantic of all places.

While on route, new plans were hatched almost daily, and the original road, east to west, had been moved in front of me numerous times. Western Montana, south of Glacier National Park was now in my path and even though the north had once again appealed to my naturalist senses, I was like a child running towards Willy Wonka’s chocolate factory, only showing a little more external, melancholic, British demeanour. I was however, lustfully feeling an adulterated surge, in the knowledge that I would be visiting my boyhood dream. It was rather like a blind date, only I already knew that I wanted to explore her…..and that she wasn’t blind. 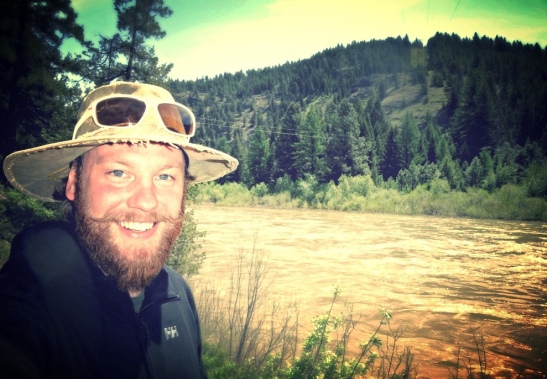 Prior to adolescence, I had dreamt of being surrounded by the landscape which Norman McClean describes in his book, “A River Runs Through It”. Later it became a film starring Tom Skerrit and Brad Pitt, which I watched as a young boy with my older cousin. We spent many fishing trips recreating the film’s scenes on the small trout rivers in the north west of England. I loved the shenanigans and mischief we managed to get up to outdoors; often fishing, river running, hiking through woods with big sticks, pretending we were in the army and carelessly sledging over rocky moguls in the snow in winter(following which, I received a similar punishment from my father as young Brad Pitt did in the movie). I often wondered what it would be like to be living the same childhood on the landscape alongside the treacherous rivers of western Montana. However, I guess I would have missed playing cricket.

Bigger mountains, bigger farms, bigger rivers and most importantly, bigger fish!
I thought about them all, yet I was never unappreciative, nor unhappy with the industrial hills and valleys of my moist, Lancashire lands. I still believe that some places in the grey, wet and cold north of England are some of the most beautiful and homely settings on earth, and even though I haven’t lived there for over twenty years, I still call it home. While growing up and learning of the wider world through books and film, and as my teachers would regularly comment to my mother about how much I day-dreamed out of the class window, I was clearly developing into somewhat of a dreamer, filled with wanderlust…and again, thoughts of bigger fish.

The experience through western Montana was maturely, as expected; not the same as I had dreamt it would be. The towns described in McCleans book were now busy, 21st century commercial hubs that I instantly had sympathy for, the roads catered for modern amounts of traffic, the people, even though in one of the less populated states, swarmed in great numbers, and the style, fashion, vibe, culture and buzz of both Missoula and Helena were most definitely not the romantic places which I had read about. I wasn’t naive enough to expect that they would be the same, war effected, speak-easy harbouring, lumbar communities that they had been 100 years ago. As nicely as I can describe them, the cities served a purpose.

One similarity does jump out every mile while journeying through western Montana; this IS fishing country! McClean described The Blackfoot, which I crossed a few times, and how it had been his play ground, his school and the river that carved through his life, being pivotal and so influential to who he was. I didn’t need to be part of the late Victorian lifestyle in Montana to see that this place was special. The poetry, the sentimentality, the beauty and the romantic rhythm of nature’s soul-massaging, aqueous flow over the picture-perfect country sparkled and danced past rocks and grasses in the sunshine in front of me. As I adventured through the landscape, I lived my childhood dream, merely by being here (although ideally, I would have had a fishing rod).

Following a rapid tour of the populated areas mentioned in A River Runs Through It, my adventure turned south through a conveniently named village named Winston. After a little excursion over the Little Blackfoot and a few rickety but well used train tracks, off a tarmac road and along once again the swollen Missouri, it was time to dry a few items of camping equipment, cover myself in deet (the mosquitoes were out in force) and settle down for a night next to the familiar water source.

It was a warm evening and a couple of unexpected, but most welcome, exploratory pelicans were dining not too far away. A deer, a few rabbits and lots of bug-munching birds casually surrounded the camp spot. In the morning it was evident that even though human, I had been relocated much lower down the food chain than previously positioned. I clearly had been utilised as a blood bank for far too many buzzed locals and my hand was the size of a small balloon (bitten twice whilst holding the camera).

Seeing the Blackfoot was special. I didn’t think it would be as poignant as it was, but it reminded me of childhood, of good times with my cousin, of poetic notions of how, as a boy I had dreamt of Montana, and how a romantic landscape can be.

Though we travel the world over to find the beautiful, we must carry it with us or we find it not (Ralph Waldo Emerson). From the age of nine, I have carried with me a tender enchantment and a romantic infatuation of a beautiful Montana without ever having met her. I have now had the privilege, and she remains an ageing beauty.