“This is Africa”….On the Road

After much time off-grid, I’ve a journey through Nkata Bay and on to Lilongwe. It’s almost time to get myself on a plane.
I’ve arranged a ride with the mechanical genius, Puncque (pronounced Punk-ee) although typically in Malawian style, he arrives roughly five hours late. I am not exaggerating. This is Africa…

Our chariot of fire for the journey back to Lilongwe is affectionally named “Scruffy”. She belongs to Bjorn and Puncque. She’s been our “reliable” steed for the time we’ve been in Malawi and it’s down to Puncque’s skills that she is able to get us anywhere in one piece. Scruffy is a tempered old girl. If she had her own way, she would probably leave us at the top of a hill after struggling to get up it, out of breath, and panting like an overworked mutt. She builds character. Puncque has a firm hand. He’s a genius, and eventually, she always bends to his whim.

We leave six hours later than scheduled which means we’ll be doing most of six to seven hour drive in the dark. However, after driving 500 meters up the hill to leave Nkata Bay, Scruffy breaks down. Puncque and Mike (who is also coming on the drive) spend two hours fiddling with, cleaning, replacing, and I think unfortunately inhaling most of what is in the fuel pump – one of Scruffy’s delicate organs. This is done Malawian-style, with a minimal tool kit, barely no spanners, a fair bit of blowing into fuel tubes, a ton of petrol squirting over the engine and the ground, a lot of umming and ahhing, half a dozen attempts at jumping her and many laughs along the lines of “This is Africa”. I’m not worried. I trust that Scruffy will get us to Lilongwe….it’ll just take some patience.

We finally push-start the stubborn bird into action. Like a nervous teenager struggling to find the right words, we stutter out of Nkata Bay and eventually, we’re on our way. 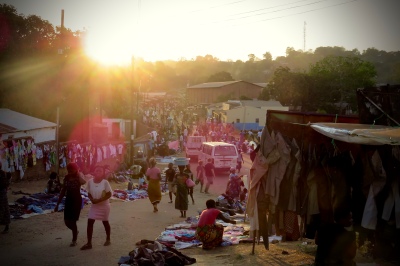 Driving is relatively easy, however in Malawi most things need the application of a different style of common sense which we are not used to in the west. Large potholes appear from nowhere. There are many people who seem to have learnt to drive by watching the Whacky Races (yet there are no pigeons in Malawi) and there are police road blocks every few miles simply for random checks. Road blocks normally consist of a bench where a man or woman officer sits with a high visibility sash set across their chest. A few old oil drums used as barricades rest on the tarmac, often dangerously and invisibly in the middle of the road so you barely see them when its dark (nothing is illuminated). Often a cone is kicked back and forth into the middle of the road as a stop/go tool. It works. Sometimes a weighted bar hangs across the road as a gate which naturally, one stops at. Technically, roadblocks are set to catch people driving illegally, without appropriate paperwork or in unsafe vehicles. I am unaware of the precise stats on how many illegal drivers are on the road, but many do get pulled off by police. The majority of people passing through pay fines for having busted lights, damaged windows, not enough air in the tyres, or out of date paperwork etc. If you are unfortunate and you have to drive a long way, you’ll pay multiple fines at multiple road blocks for the same offence. I heard of one unfortunate soul having to pay a fine for not having any windscreen cleaning fluid in his tank. Thats quite a thorough check. It’s a good idea to keep your car in fine fettle!
If you’re hasty or rude, you’ll wait longer while they inspect your undercarriage. If you are not forthcoming, you could be held for quite a while as vehicle checks are thorough. If you carry no money, you could be waiting for long time indeed as an appropriate fine is arranged or arrest made. There is no point getting irate with the system. It does work. It just takes a short while to get used to it and to all the stops. It’s actually a system I wish would be adopted more in Europe. It absolutely is the fastest way to locate illegal and dangerous vehicles/drivers.
A slight concern is that at night, road blocks seem to come alive. It’s harder to see things so being stopped at each one is a prerequisite. There is often very little illumination at the roadblocks, and driving at night is inevitably more dangerous everywhere. Bicycles and walkers freely wander the roadside verges in rural locations alongside goats, chickens and other livestock. It is inevitably harder to see anything or any body that is around the roads at night. Collisions in Malawi are far too common. Thankfully, Puncque is a safe driver, but in the dark, it’s going to be a long drive. 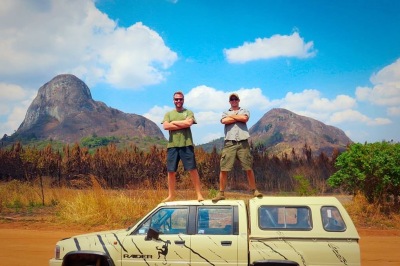 An interesting addition to our truck’s itinerary this evening, and something which will undoubtedly catch anyone’s eye, are the two external fuel tanks on the back of the flat bed. A plastic container with two pipes sticking out of the lid is our tank to drive the journey with, and our spare tank (the one that’s been removed from the truck) is sitting next to it with an open pipe hanging freely from it. We stop at the fuel station to fill it up. Instead of driving up to the fuel pump, we park across the lot to fix a brake calliper which has wriggled loose and is clunking under the wheel arch. We carry Scruffy’s fuel tank to the petrol pump. It’s a strange sight, seeing our fuel tank being filled without it being in the car. Oddly, and though I don’t believe it is illegal (the car is on it’s way to be repaired in Lilongwe), the police have seen the fuel tank arrangement but they haven’t queried it. 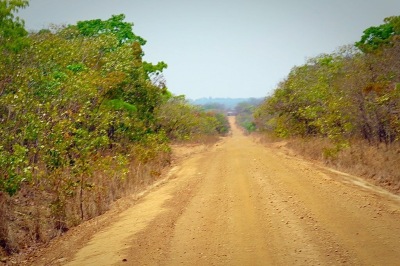 Accidents happen, and it wasn’t long before we came across a few. Malawians take the safety of a crash site seriously, and into their own hands. A fire service does exist in the cities but in the sticks, it can be slow to reach anyone. Sometimes the police are difficult to locate and the localised chief system isn’t really equipped to be dealing with road accidents. People simply fix it themselves or wait for charitable-help to arrive. It’s quicker. The one thing that I find wonderful, is that when accidents occur, people put branches on the road from nearby bushes or trees. Villagers nearby often come to slow traffic (and only occasionally cause extra punctures with their branches). Foliage is cheaper and more readily available than high vis orange cones or signs. When the accident is particularly bad, the branches stretch much further up the road. If someone simply has a flat tyre, you’ll find a few branches either side of the vehicle. In the dark however, we’re dodging and swerving around strategical-placed woodland for almost a quarter mile before we see an articulated truck down a verge with luggage flung about the roadside and people standing around waiting for a solution in the dark. It’s quite a serious situation and with passengers of the accident appearing without torches, figuring out the entire mess looks like it’s going to have to wait till dawn. People will simply start walking away from the wreckage or sleep next to it to remove their belongings in the morning. These kind of scenes sadly, are all too common on potholed roads used by rickety old trucks.  Concerted efforts are being made to improve the roads in Malawi, but with high rural-populations near to the busy roads, difficulties of safety and high casualty rates aren’t quick fixes. There may be a few controversial views towards the manned-road blocks, but they play a vital role in the welfare of Malawian road safety.
We arrive into Lilongwe around 3am. I fall into a tent for about four hours. Tomorrow, I’m leaving on a jet plane… 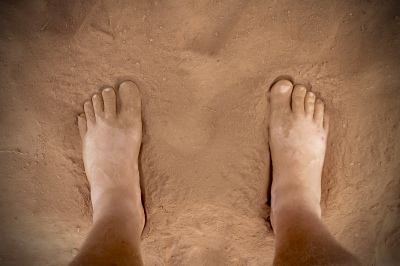