A Hurricane, a flirtatious Miss Havisham, and some drenched, French lingerie 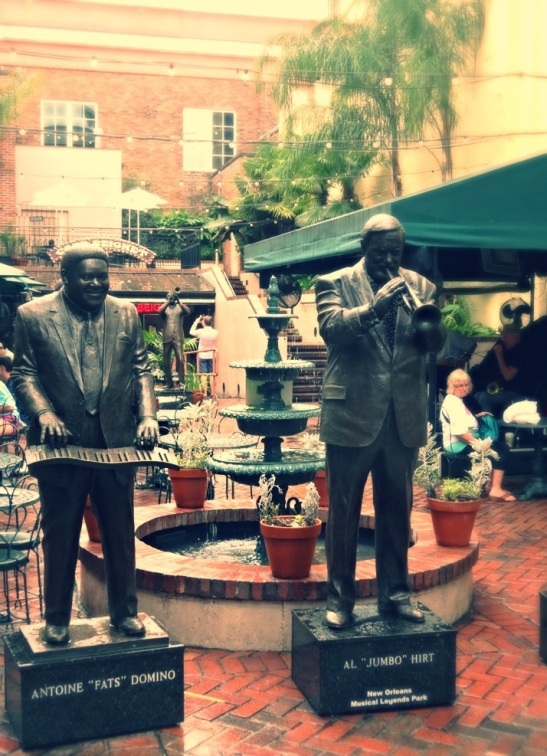 On $6 a day, and with plans to hit my environmental checkpoints on time, I had no intention of reaching Texas, let alone New Orleans.
I have seen and met a few people around the globe travelling on tight budgets, across continents on unicycles, paddling a thousand miles in a kayak, kicking a soccer ball thousands of miles to get to the World Cup, hiking across countries and many other variable challenges, for all kinds of different reasons. One thing has struck me; from every adventurers tales, in every country, amongst every walk of life, whatever the challenge: Every individual has received unprecedented, extraordinary, selfless, and often (while living on such basic means) indulgent hospitality. Often surprised, and as humbled as I am, I am no exception.
I was taken to New Orleans, and was liberally treated beyond what I could imagine. 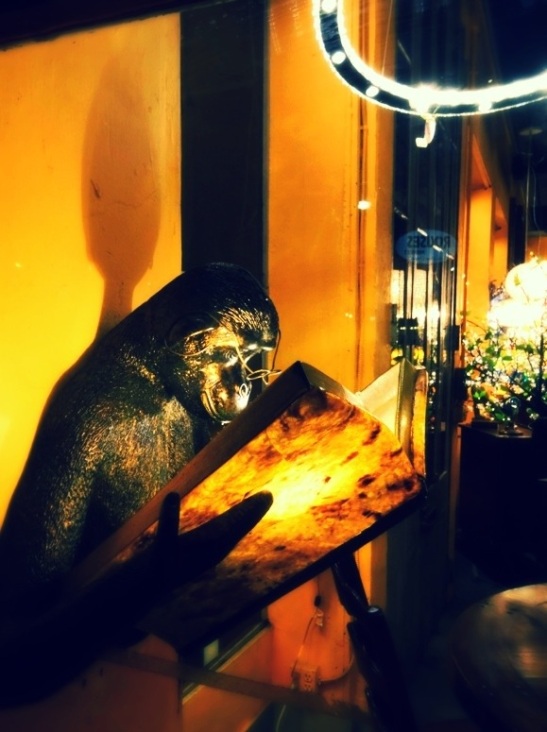 There are only a few cities around the globe which have instantly, like a teenage crush, bolted into my loins and said “Hey, you with the emotionless look on your face – Forget holding hands, come cuddle with me naked (“cuddle” NEVER means cuddle)!” and with that, they are in my new urban cuddle puddle. I’ve been naked with my favourite cities; Prague, Paris, Edinburgh, and I’ve gotten away with it – and now, like a teenage lover, the hedonistic New Orleans has covertly yawned, and put an outstretched arm around my lonesome shoulders. She’s a sly one. 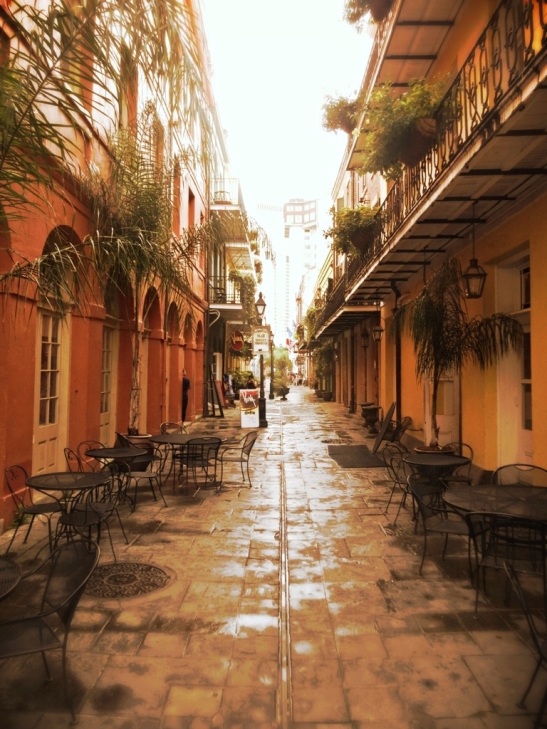 Even though my arrival into the city was rain-drenched, I could still feel the enigmatic streets oozing with charisma, with colourful, cultural history, with a cajun flavour, a high-hat of positivity and a beat that hummed under the harmonious, humid streets. It’s soul that I just hadn’t experienced anywhere else in the country.

The city was relatively quiet because of the downpour. Porches were empty, only a few characters were mulling around on damp, street corners, restaurants and cafés were closed in the suburbs in the afternoon heat, buses and street cars were almost empty and the foliage that clinged to the streets in the sweaty, southern air was still and silent. 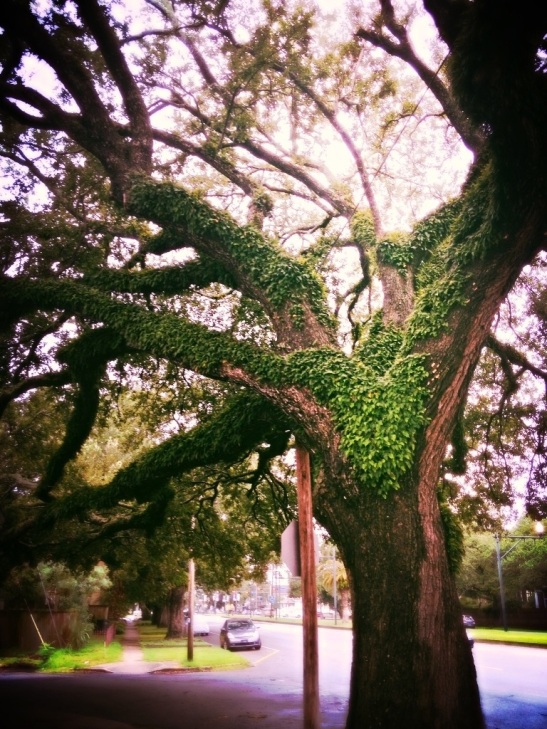 Yet it wasn’t eery, it isn’t a sad place, and like so many cities when it rains, it didn’t welcome me with a greyish, sympathetic, limp-handshake. I could sense, that from the base of the dirty gutters up to the tops of the elaborate and chic, French-style buildings downtown, there was a hum-drum of infectious, heart-warming vibes. Even the trees, with their bark covered in vibrant green moss and climbers, seeped a hot happiness that suggested they could, at any moment, drop a few outrageous dance moves to this city’s groove.

It isn’t hard to see why New Orleans is so attractive. She’s suave, sophisticated, and shows off a renaissance-number of curves with flashes of lacy lingerie. She’s passionate, poetic, bohemian and chic; encompassing the influence of French and southern American history into her library of debauched, effortlessly stylish, antique book cases. She clearly drinks a neat bourbon (legally, and without care while waltzing down the artisan streets) to keep her spirits high, and has a cabinet of cocktail ingredients that every high class Madame would have in the corner of their loft space over looking a city which, although maybe full of floozies, (and charcoal/callous-fingered artists and musicians), she is a resolute and flirtatious Miss Havisham. 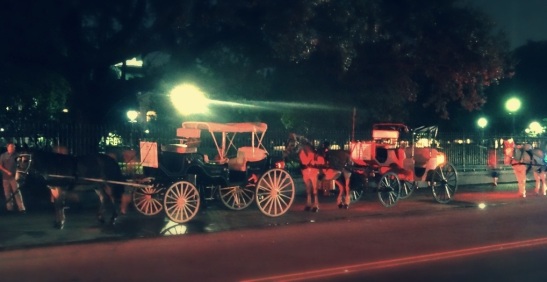 My first evening, in possibly the most unique city the USA has to offer was like stepping into a sauna of smooth jazz; sweaty, moist, beat-infectious and awesome. Leftover remnants of mardi gras hung around the buildings and from the trees; signs of colourful, alfresco hedonism were draped over the bohemian edges that framed the shabby-antique city. 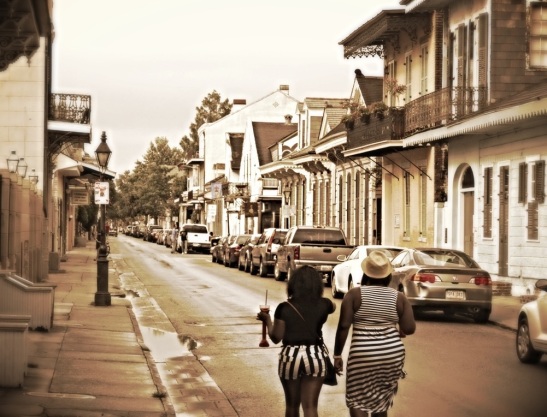 I was taken to Tujagues – documented as the second oldest restaurant in New Orleans. The traditional French-creole/Cajun cuisine was possibly the best food I have eaten since arriving in the country – which arguably isn’t hard to beat when living on $6 a day. However, the style in which it was delivered, the love and attention to the ingredients, the detail on each plate, and the relaxed yet appreciative atmosphere in Tujagues transcended me to the traditional and impressive French kitchen which I grew up above, as a five year old. The chef clearly knew what he was doing, and although I have missed being somewhat of a foodie and a semi-ok cook on this journey, enjoying some edible delights from a professional kitchen was completely appreciated.

I was treated to a five course extravaganza, each dish accompanied by a traditional cocktail. As I used to be a cook, and a cocktail barman in an previous decade, I set high standards…and they delivered. However, one thing I can’t quite get my taste or texture buds around, is corn bread. It’s sweet! Yet Americans seem to think it goes well with everything savoury, and it crumbles like a dry lemon drizzle cake, turning to corn flour in your mouth. After tasting an oyster and shrimp bisque, some spicy swordfish, and some perfectly roasted lamb, I think I enjoyed the best ever banana pudding and caramel sauce that I have ever tasted – and I’m not a huge banana fan. No puns or jokes in this text; I grew up in France, maybe taking for granted some of the best cuisine in the world: The food in New Orleans was impressive, and not just at Tujagues. 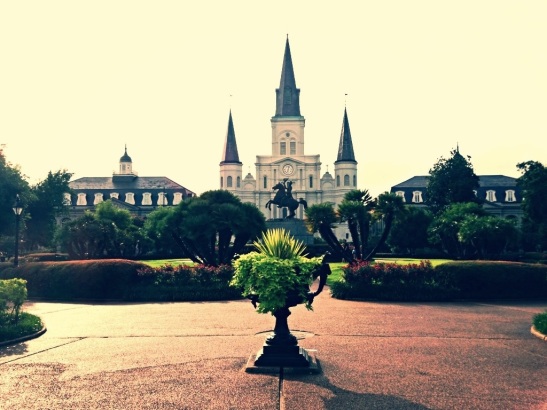 The city known as The Big Easy is a melting pot of cool, smooth culture, spanktastic food, soulful and infectious good-time music, eclectic and varied art, beautifully chic antiques, plenty of dowdy and dusty artefacts, colourful and quite morbid history, stunning French/Spanish, and (in the suburbs) southern American architecture, devout religion, and voodoo influence (more in part II). All the city’s cultures were brought together in the events and aftermath of Hurricane Katrina, and since 2005 New Orleans has been a recovering city.

As well as being a gigantic tropical storm, Katrina is sixth on the list of most powerful Atlantic hurricanes. Even though Katrina registered as a level five hurricane (that’s pretty damn knarly), with winds up to 175mph at its strongest over the Gulf of Mexico, when it reached land, it dropped to a level three, and winds were between 100mph and 130mph.

The reason Katrina was so destructive, was because the Federal levee system failed. The result was the worst civil engineering disaster in American history, or as one Doctor at the University of California stated, “the worst engineering disaster in the world since Chernobyl”.
Floodwalls and levees constructed by the United States Army Corps of Engineers failed below design specifications, and 80% of the city flooded. Emptying New Orleans was relatively successful after the first mandatory evacuation in the city’s history. However, tens of thousands of residents who remained, will be forever remembered on the news as those suffering and barely surviving in the giant Louisiana Superdome or the New Orleans Morial Convention Center. More than 1,500 people were recorded dead in Louisiana, most in New Orleans, and others are still unaccounted for. 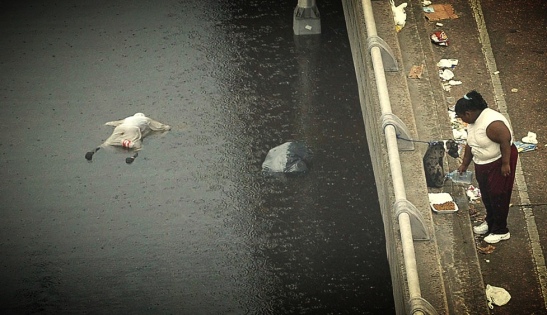 Even though it was a massive storm, I have mentioned before that we continue to house ourselves poorly (both geographically and by design), in the path of these natural, spectacular gigantums.
I may sound unsympathetic, but on the contrary. New Orleans was intelligently, originally built above flood levels and it is almost impossible to expect the city to move. The rebuild process was commendable and charity completely needed. However flood levels have risen, and nature repeatedly shows its capabilities against our unfortunate, unnatural, modern engineering.
Seeing the city now, and witnessing how proud and resilient its residents are, it is a heart warming experience. It is practically alive with positivity after the disaster. It is also noticeable however, how much of the older part of the city seems to be unaffected by flood damage. Strategically positioned, original cityscapes are commonly built to last, compared to our “developed”, expanding, and modern approach.

To not just have a one dimensional view of New Orleans, I didn’t just spend time seeing the old French quarter of downtown. A very short ferry trip, across the river takes you to another world, onto a century old, flat, historic battle ground that was once boggy grasslands. Now filled with industrial housing for the not so rich, working class, it also has at its epicentre, the first domestic sugar refinery to process one million tons in a single year: Domino Sugar’s Chalmette refinery. Although hit hard by Katrina, it reopened just 98 days after the disaster, and still processes about 60 percent of the raw sugar produced by Louisiana’s sugar cane farmers, and about 19 percent of the country’s cane sugar. I couldn’t tour it, but it appears future tours and public access is being developed.

The view of the industrial river bank was stark, in comparison to the romantic, chic and bohemian glory of the colourful old town. It appeared monotone, drab, and grey against the grey skyscrape. The bridges over the Mississippi are tough, old iron erections, and the streets around downtown, in suburbia are poorer, unkept, dowdy – although houses were elaborately detailed compared to many across Texas – they were run down, fractured, and in need of some love and restoration.

Such is the flirtatious, carefree intrigue of New Orleans. She seems to wear a kaftan and a sun hat, but under its wide brim, in her dark shadowed eyes, she holds many secrets, many taboos, hedonism beyond dreams, and is culturally in bed with all kinds of miss-fits. She isn’t afraid to be seen in every neighbourhood, throwing a wry smile at the tourists that might think they can tame her. 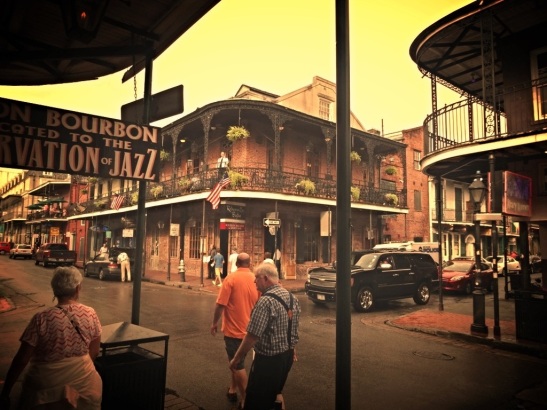 Rather poignantly, much of the interest in her colourful past, and now sadly in her present (following Katrina), is around suffering, misguided and misrepresented religious practices, and death… 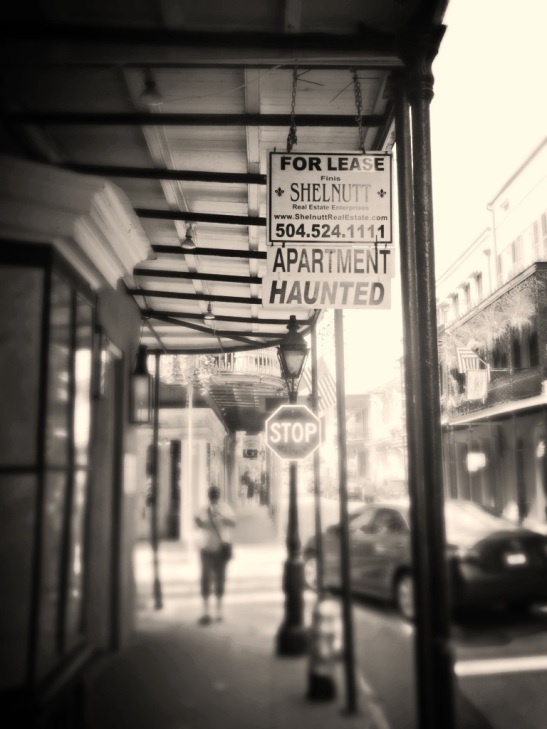 One comment on “A Hurricane, a flirtatious Miss Havisham, and some drenched, French lingerie” 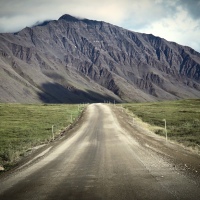