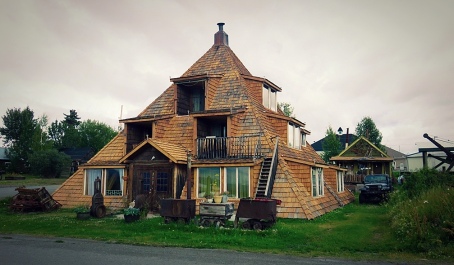 Ironically, on the first day since the adventure began which I haven’t worn my sunglasses, I’ve indulged in ice cream. I added rum. I think it was a mini celebration for completing the entire length of the Alaska highway (returning to it for the section we missed by veering north to drive to Inuvik). KP’s dream is finally fulfilled, although for me, I just feel the last section of a very long (but incredible and enjoyable) road has been ticked off.

Heading back east, the gravel track turned into a wet, potholed jungle and it was the most dangerous section of highway on the entire road trip. While resembling the elephant man’s back, the roads in summer are under constant maintenance. There is just too much road to mend and each year as the elements tear large sections of them apart. After a few days drive from Wrangell St Elias, through Alaskan mountains and open brushland where caribou enjoy a hike in autumn, we arrived at the Canadian border. Following a gentle welcome as usual, any evidence of population disappeared. Vast Yukon pine forest blankets the landscape and camouflages the gashes in dramatic hill sides and peaks. Moose ponds and wetlands also sporadically claim their place, flanking our winding drive. Except beyond the Brooks Range, north into the Arctic, there have been no views across Alaska without mountains and this continues into the Yukon. It’s a slightly tiresome and extremely bumpy drive as we head back towards Whitehorse for some fuel. The end of the trip appears to be within our grasp as there isn’t much road left to continue the drive. The highway turns flat and a quite uneventful, and the mood in the truck turns a little contemplative.
Once past Whitehorse, our only route now is to Haines (for our ferry to leave Alaska). However, with over a week to get there, we have more than a few days in leu. (Obviously desperate to avoid ending the adventure) I throw up the option of heading in the opposite direction to complete the north Klondike loop – nearly the only marked highway we have not driven on since leaving Alberta (there aren’t many). A few small places along the loop can be explored, but before we disappear off the grid for a few days, we decided to head ninety miles south on a dirt road (because we can) to find out what is at the end of it. 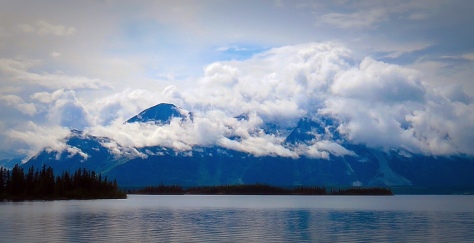 Strangely, with a Thai/Philipino fusion restaurant at its centre, we found the lakeside town of Atlin. Although the menu offered various options from Thailand, the Philippines, the U.S. and around Europe, it wasn’t the food itself that provided the fusion. We decided we deserved a decent lunch after the 16 kilometres of muddy roadworks on the drive here, so we indulged. We had exited the Yukon and Atlin is the most northwestern town in British Columbia. Almost quaint, it was quiet and relatively picturesque. Once an old trading post for people shipping supplies up the waterways to the mountainside mines during the gold rush, it was a busy port on Atlin Lake. Remnants of old mines and rotten cabins are strewn around the road sides and lakes shores; more evidence of bustling industry that once stretched through the Yukon a century ago.  Atlin has made efforts to keep its historic past visible with museums and many of its old buildings restored and signposted. 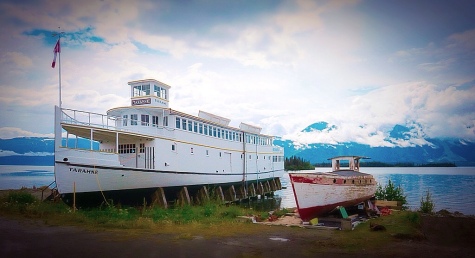 Yet it appears artistic and a little hippyish in its celebratory approach to modern survival. Around town there are colourful attempts to show off what small festivals they have and how proud they are of their heritage.  We found a long road heading into the mountains and appearances suggest that this road led to where Atlin might now make some of its money.

Twenty or so miles on the only dirt track into the lush mountains, we found a few more miles of overturned river bed. Odd at first, but clearly modern mining at its most destructive. It seems inconsequential with so much countryside around and it’s extremely easy to miss or be ignorant of how much is happening in the woods. Human lust for money has brought machinery and portacabins here to continue in the search for buried material, and the river is our victim. We found no documentation to know exactly what was going on so maybe my assumptions are overreaching, but my only hope after the localised ground work, is that the search for whatever they seek is worth the miles of drastic dredging. Once completed, work forces like this should be made to replace the piles and piles of overturned earth, rock and riverbed, back to a more natural state. We teach curious children to put rocks back as they found them for the benefit of the wild, but when we find shiny elements under mountains, we appear to forget our lessons.  The remnants of abandoned, open mines and derelict remains of ramshackled buildings can be found all over the area, and although romanticised through the human spirit to be pioneering, I can’t help but think about the how frivolously we leave unsightly and destructive scars across our landscape. Atlin was a quiet, unassuming and pretty town and despite the reason why it appears to be sustaining itself, we appreciated both its eclecticism and its efforts at the end of the road. 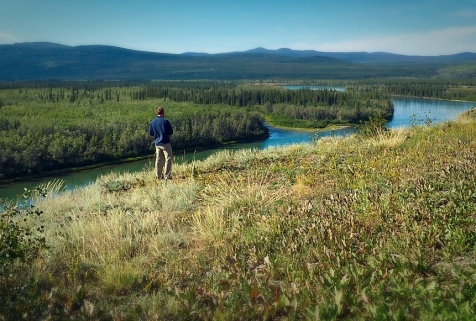