Our first day on the road was a shaky one. It was also the first time KP gave me the reigns to his four wheeled, fancy lady, and that reminds me, I don’t think she has a name!
The drive from Clayton started beautifully. KP drove in the morning sunshine; along the sparkling St Lawrence River, past some lush, green farmland, through some vibrant forest and along roads lined with plenty of orchards. When he handed me the reigns, I drove along the highway, through hurricane-esque rain storms, high winds, and nil visibility. We came to a complete stop on the interstate. My first time behind the wheel of our sturdy chariot, and my first time driving in the states since last year – I’m happy we weren’t found swimming by the road – I didn’t bring my banana hammock!
We drove twelve hours on day one, skipped through upstate New York, flirted with Lake Erie, rummaged through Pennsylvania and came to rest at a stop by the interstate in Ohio, just west of Toledo.

The following morning, KP thought we were continuing west and on past Chicago, but as he loves retirement surprises, and not looking at the map, I instructed him to turn right.

We drove north, past Grand Rapids, and it soon became apparent that we were heading around the Upper Peninsular. KP had mentioned that he had visited this area, east of Lake Michigan, over a decade ago, so I took him on a trip down memory lane. We found The Antler Bar for lunch, in Pentwater. It was a nostalgic sports-friendly place with many heads of dead deer (not all native) on the wall. 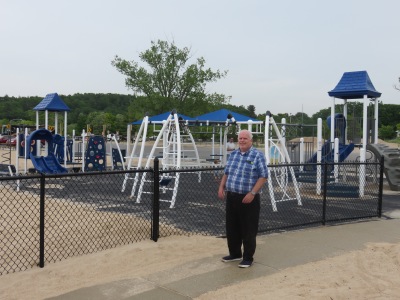 Get the ‘KP’ look for your Childrens play area…

Following a belly full of food which I didn’t have to prepare, and a beer or two for KP, I took over the driving. We headed north towards Sleepy Bear Dunes National Park and thankfully, the rain storms that had me wandering yesterday if the camper was watertight, had dissipated.

I have seen Lake Ontario, cleaned my feet in Lake Erie and now I was camping in the trees next to Lake Michigan. Famous for it’s big dune, Sleeping Bear National Lakeshore is a mildly strange place. As a Brit, such a massive sand castle so far away (I’d guess over 1600 miles) from the sea is a little like seeing a penguin in the desert, but unlike many lost penguins, there are plenty of dunes here.

Lake Michigan is tonight, eerie in the evening fog. Not being able to see just how big it is in the atmospheric-uncertainty is even more unnerving than seeing the vast body of fresh water stretch to the horizon in clear daylight. Britain just doesn’t have inland ponds anywhere near this big; in fact, if any of the Great Lakes decided to go on a tea break to Britain, they could dunk England, like a disintegrating digestive biscuit into their waters without even touching the sides. The Great Lakes, are oceans.

We’ve covered over a thousand miles in a couple of days. Trudging through and beyond the rain storms and getting across some familiar ground was tiresomely, our main goal. Although we’ve taken a turn that KP wasn’t expecting, he has just had a reminiscent smile on his face as he scoffed some food in a bar which he never thought he’d see again. We’re very aware that we have a lot of driving ahead before we really get to explore the Rockies and beyond, to the north west. We are however, on our way to reaching some much preferred rural areas tomorrow, and I’ll hopefully see Lake Huron. I’ve only then one more Great Lake to tick off my list, Lake Superior – maybe on this trip.

Undecided on which route I will take from beyond the Upper Peninsular, I first have to cross the historically strategic but now touristy for its fudge, Straits of Mackinac.