Something to do with a drunk captain…

Something to do with a drunk captain…or at least an extended stop while he visits his mistress(es) – of this I have absolutely no evidence other than everyone talking about it on the ferry like its yesterday’s news. Whatever the reason (I’m blaming mistress number three) the boat is, as usual, delayed.
Following a very short time back in Nkata Bay, we’re on the evening Ilala ferry across Lake Malawi to the island of Chizamulu. Deep into the night we sail across the lake aboard the typically-unreliable and rather arthritic old swan. I familiarise myself with the hard, wooden top deck and make the regularly-repaired wooden floor of first class my bed for a few hours. Throwing over a thin blanket and using my backpack as a pillow, it’s a common sight amongst the night travellers if they aren’t drowning themselves at the bar just a few meters away. For some reason I have hit a wall. Maybe it’s the relaxing motion of the swaying boat, maybe it’s the very hectic environment of Nkata Bay, maybe I just can’t handle another night of drinking after the recent birthday, but my body shuts down and I can’t face any more alcohol or an atmosphere of smoke-infused-engine-fumes. On possibly the hardest surface I have slept on for a few months, I steal a couple of hours sleep with my ear plugs in. 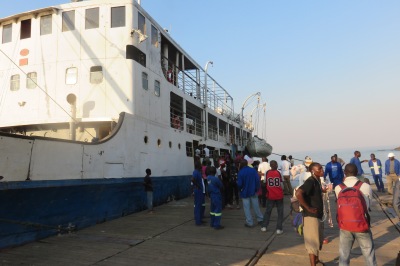 I wake up barely refreshed, but better for not intoxicating myself. My eyes open to a night sky rich with jewels and gems. Like staring into a shop window of a diamond dealer, tonight the African sky over the lake is unpolluted, unclouded, and infinite in its depth. If it wasn’t for the bloated and phlegmy noises coming from the ships engine, drowning out the drunk chattering from the top-deck bar, it would possibly be one of the most overwhelming visions of space I have ever lay eyes on. I remember the awe-inspiringly clear and deafeningly-silent, tear-jerking nightscapes while in north east Australia, Montana and Utah in the USA, and unforgettably from the desert, 20 Kilometres from the Saudi Arabian border deep in the desert of the U.A.E. Nothing captures the desolation of the dark desert more than the endless night above it. Right now however, I have the blemish of sound droning over the unearthly spectacle…but I’m by no means disappointed.

It isn’t first class as you might know it. The deck is merely a segregation area away from cattle-class on the lower levels. There is good reason why is it called cattle class, and it’s nothing to do with the people travelling in it. Mingling on the top with tourists and locals alike (albeit slightly more wealthy locals) isn’t at all an uncomfortable ride. There is space for a few people to hang hammocks and some people even pitch a tent. Although I’m not sure why. Maybe they just don’t like people seeing them sleeping. Its warm but cooling upon the deck and there is even the need for a thin blanket.
Sitting up and stretching off a few aches and a stiff neck from the first class floor, I see Chizamulu for the first time. As usual there is a gathering of small boats and dugout canoes around the ferry with many people throwing things to the well-balanced kayakers who will navigate back to shore in the dark. Nick, one of Bjorn’s closest of drinking buddies in Malawi, owns a lodge on the island. They’ve been propping up the Ilala bar for the journey into the night. We’ll be semi-soberly alighting with him and hopefully finding a comfy bed till morning. His logistics man arrives in a boat fit for half a dozen and somehow we throw all our belongings down to him. He hasn’t brought a big enough boat, so we have to rope in a few extras to get the job done. Nothing is easy either after a tankful of beer, or after just waking up in the dark on a boat somewhere thats unfamiliar with no idea of what’s going on. By torchlight, I grab all my stuff and somehow we all get off the boat. It’s become typical.

Through the darkness we paddle. Well, Nick’s deckhands do. It’s a short trip and flickering lights on the shore quickly light up the nearby village. Nick’s place is hidden by some enormous rocks, silhouetted against the sparkling charcoal sky. It’s hard to get a grasp of things with no light, but we amble up the rocky beach andbafter dodging  a few washing lines and low hanging palms, we dump our stuff at the door of a very solid house structure. I’m suffering a bit with a hazy head and admittedly, even though we’re wary of me possibly having malaria, I’m pretty certain I should feel worse than I do. Nick hands me a bottle of water while he quietly puts on the lights and some music in his rock-top bar which is right on the edge of the lake. I head off to bed with only a mild temperature. Hopefully tomorrow, I’ll be well enough to explore…I hear there are some crocs nearby! 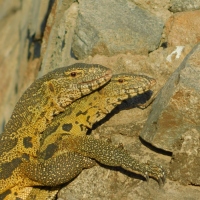 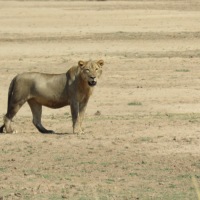