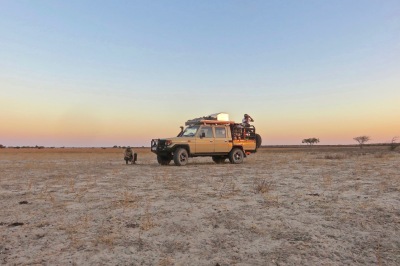 Arriving at the Kutse gate of the Central Kalahari Game Reserve is somewhat of a relief. It’s been an intrepid drive of excitement and expectation, but what’s ahead is what we’ve come for. The drive is about to be left behind and the expedition and task is ahead.

Very quickly it becomes apparent that the ranger on the gate has hardly ever left his his post. We are told that it is a five hour drive to the next camp if we break the speed limit of 40km/hour along the very sandy track. I won’t beat around the bush – Penelope is the most able of vehicles on this (and in fact on any) terrain. This guy has clearly been smoking something, or he’s never actually driven across the desert himself.

On the extreme sandy sections, the drive is more of a crawl. Penelope may as well be using her snorkel and have the oars out. It’s like dredging through treacle. The tyres can barely be seen and it is tough going. I experienced some tricky motoring on the muddy and icy track in the arctic in northern Canada a couple of years go, but this makes that look like a walk in the park. Keeping Penelope moving and on the “road” is a challenge and should elephant suddenly cross our path from the thick bush either side of us, well, it isn’t worth thinking about.

There are only two minor instances where Penelope decides to “have a rest” in the sand and one of those was right in the middle of the Basarwa village in the south end of the reserve. There are still groups of Kalahari tribes living in the desert (San). The Basarwa are not related to any other tribe and descend directly from early stone age hunter gatherers. These migratory people do not domesticate animals or cultivate crops, even though their knowledge of both flora and fauna is extensive. Loosely connected family groups of roughly twenty to thirty people used to follow seasonal animal migrations between mountains and coastline. Now, they still move around, but there are also some more substantial bomas (fenced, anti-predator living areas) in the bush.

The term, ‘bushman’, came from the Dutch term, ‘bossiesman’, which meant ‘bandit’ or ‘outlaw’ and today, the term bushman is deemed derogatory as it does not distinguish between tribes or types of tribal lifestyle. The San are some of the most persecuted peoples in Africa. Essentially, when the white settlers arrived in the mid 17th century Southern Africa was inhabited by three main groups – the hunter-gatherers (San), the pastoralists (Khoikhoi) and the farmers (BaNtu). The Whites forced a continent into slavery and developed mass-farming and large settlements across vast regions. The San were the worst off. They didn’t farm, adhere to boundaries, or grow crops. They fought but would rather die than be made into slaves and their ancient ways still trouble their neighbours today. Ironically, farming has stripped their lands of their food sources and what they need to survive. They were almost wiped out. It’s easy to view them as poor, uneducated or lacking in worldly information, but meet these people for just five minutes and you can’t help but respect and be humbled by their complete understanding of the world around them, and sadly, how we’ve decimated it from their care.
I urge Penelope to find some deeper gears and she easily brings home the bacon. Although it sometimes feels like a strain, there is a huge sense of serious pride and relief knowing that we have the perfect chariot for the job….although the Basarwa seem to be just fine on foot and on donkey! 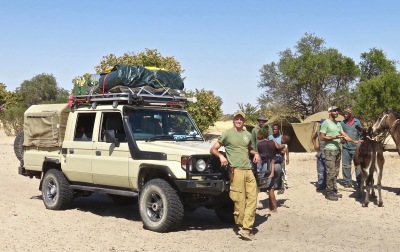 In the five hours the gate-ranger gave us to reach our camp, we barely make it half way – and we haven’t been idle. Some small sections of the track are firmer, but the respite doesn’t last longer than a few seconds. We plough on but reaching the speed limit on these roads is nigh-on impossible – you’d need a hover craft. I have never driven on softer, deeper sand and a lesser vehicle wouldn’t have made it beyond a couple of kilometres from the gate. 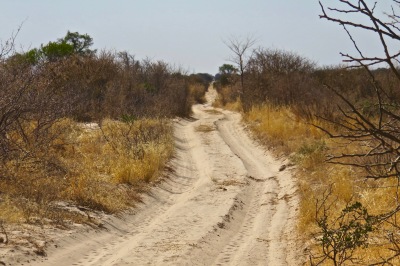 Against park rules and without any choice, we stop to camp over hundred kilometres from both the San and any marked site. Nobody is going to come find us! There’s normally a few days of wondering before any ranger will begin a search. I’m sure this happens often.

We’re prepared, sensible, cautious, and well stocked. We will improvise home on the road before dark once again. 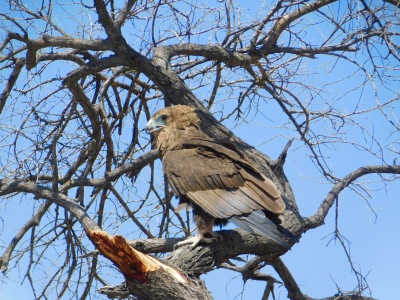 It is almost impossible to pull out of the sand and off the track. Penelope parks in the road and we make camp. Should any unlikely vehicle come along at this time of day, its passengers will likely be happy to join us for the night.

The bush either side of the sand is quite thick and the grasses are very high – making it impossible to see much. The drive however, isn’t without wildlife. The fairly aggressive but majestically powerful Gemsbok, at times, gallop alongside Penelope through the grasses. 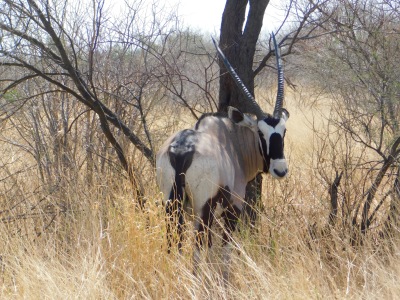 The large and pompous Corey Bustards (Botswana’s national bird) strut around the salt pans like recently-redundant butlers, and occasionally take flight in front of Penelope as she purrs through some of the more solid sections of sand. While we make camp, the rare and ridiculously-odd, black Widow bird (as seen in Planet Earth II) have their jumping competition around us. They cackle and tweet into throaty somersaults and come back down to earth as smoothly as a fat toddler falling down the stairs holding a cocktail of nails. It’s entertaining, but difficult to take a photo as the sun goes down and the grasses are higher than usual.

A tiring, bumpy, sand-filled day ended with a warm fire and some decent grub. In the desert, the temperature dropped to single figures after dark and every blanket, plus socks and woolly hats were donned for a good night sleep. It would have been bliss, if Bjorn and I were not woken by insanely loud howling and grunt-screeches which were both confusing and unfamiliar. Quickly awake with concern, mild fear and steam-breathing excitement, we were both on edge and peering out of our tent! After a second to gain our thoughts, we knew what was outside and shining a torch onto the beast just six meters from our door confirmed our fascinations. We expected Penelope might be at risk of a thorough pat down, but thanks to our rigorous approach to packing our food away, a cap was just merely tipped in appreciation.

It was haunting to hear the head-scout screeching out his calls so close to us. It’s exactly as a horror film might have portrayed these super-efficient predators: clinical, methodical, and with an almost serial-killer instinct. In reality, they are just as fearsome, but as we listened to the communication in the dark, it was clear how intelligent and magnificent they are. It’s no wonder they have the highest kill-rate of any predator in Africa, and possibly the world.

Like specially-trained military might use a walker-talkie, the head dog howled to another a few hundred meters away with a very specific call. The faraway dog replied with an almost exact copy of those multiple sounds. Then again, the dog near to us called another. An almost exact cry came back in reply from a few dozen meters on the other side of our tent. Each call to each comrade was distinctly different and this continued till at least five more dogs had replied from the surrounding area. We were the subject of the discussion and sat directly in the middle of this hunting pack. Thankfully, the head scout (normally one of a pair) was telling each and every dog that he’d found something interesting on the road, but this time it wasn’t worth investigating further and that they should move on. Bjorn and I watched from our tent as the scout sniffed around Penelope (we had no food in the tent) and decided that it wasn’t what they were after.

Efficient and methodical; you can’t help but appreciate their magnificence, their intelligence, and their raw beauty. Communicating intelligently, like no other predator I have ever heard on land. Sadly, yet again, it is due to human activity that wild dogs are so rare. The most feared predator throughout colonial expansion, we almost eradicated them from Earth. Thankfully, where we have encouraged them to flourish, they now they appear to be doing well.

Even from a fearsome distance, just their presence – let alone their deafening sound – was one that I had longed for – and one which I never thought I would experience. To have wild dogs display their impressive communication skills just meters from us is unforgettable. We were completely shocked into being so privileged.

2 comments on “A shocking privilege”