Why did the one-armed man stab the pigeon-killer in the neck?

Side roads, unfit for any mediocre vehicle, lead to places the mind can’t imagine. It’s why we take them.

A trip to Diaz Point! Awaiting us was a dilapidated shack of a cafe, some basic, eerily soulless and empty back-packer-esque dorm rooms which were falling apart, a weather-beaten, crumbling house, and some out-buildings which were quickly being destroyed by the unforgiving and encroaching coastal conditions. There was no furniture to be found. There was however more to the old and expansive tourism spot; broken boats, raggedy old sea ropes, awkwardly spliced sign posts of a camp ground that once existed, a steel tower on the rocks as if attempting to be some sort of beacon for passing ships – but rather than a lighthouse, it looked more like a rusty old billboard holder, left over from a temporary film crew. The place was sadly, accelerating into ruin. 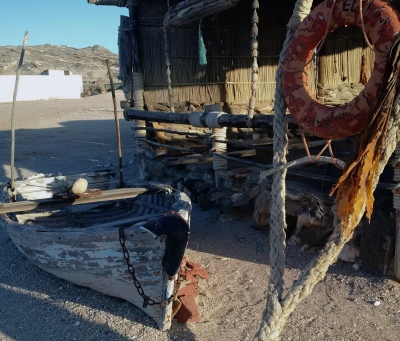 To get there, a drive around some sensational, low-lying lava rock formations which seem to have had their pause button pressed not too long ago. They wait to continue to ooze again, out into the cold and volatile salt water. The views are sporadically inspiring, with colossal, dark-clouded sea-scapes in the distance and dusty, abrasive winds heavily clogging the immediate air. On route to the point however, most long-distance sights are skewed by rocks rising up either side of the track. The volcanic obstructions blind you of a hectic, industrial mining sites, strewn with broken rock and gravel. To go anywhere off road was to trespass, marked by regular signage. They take their mining very seriously here… Although we didn’t, the rocks would have made any attempts pretty difficult. So close to town and ocean, yet we felt like we were driving on an exoplanet set Dr Who would be more familiar with. Half expecting giant, alien slugs, camouflaged against the black rock, or robot men dressed in armour made of hardened grey sand. It was like venturing into an alien mine. Maybe we took a wrong turn – not something you want to do in Namibia, as there are astronomical fines and sentences for trespassing on expansive, diamond-mine lands. I don’t know why – never trust google – but by the info we had, we expected to find some wind-swept but cosy accommodation by the sea. Instead we found a squatter’s ramshackle being taken over by sand and sea-dog; ‘hermitted’ by an aggressive, very large and loudly-drunk, abrasive Namibian chap named Tucker. He was approximately six foot six, wearing well-worn flip flops, a red headscarf, brandishing a long wooden staff and tightly gripping a lovely, warm beer. It wasn’t his first of the day and by the whiff of an ale-soaked carpet, it wasn’t his tenth either. It was an assertive welcome, and tentatively received…

Tucker proceeded to show us around “his” plot. Although clearly under the influence of more than one vice, he did his best to impress us and we did our best not to upset him. Appearing fearful or unhappy to be there may have just tipped him over the edge.

At one point, he grabbed me around the neck by surprise, on the balcony of the second floor of the house. Split second judgement followed, and all of us were ready with implements capable of inflicting various degrees of incapacity, I doubt we would have been fast enough to stop any misjudged human tossing. It wasn’t an embrace which warranted any immediate kick back on my part. Calmly does it… Thankfully, Tucker backed down and only pretended to throw me to my doom unless I agreed to become his “greatest comrade”. A hilarious quip from the big guy while we all eye rolled at each other and mumbled something about attempting to keep him at arms length.

Although familiar with the space by the sea, it was very difficult to believe that he had purchased it and was about to spend thousands getting things back up to speed. But let’s not judge. This guy could just be a drunk millionaire living his dream of neighbourless solitude – we can all dream. But even more impressive; I managed to imagine his efforts to run the place. Although sadly, whilst only envisaging him eating his staff should they step out of line. On reflection, he possibly already had. We were genuinely interested in the failing plot but sadly, felt overwhelmed and unable to indulge the behemoth Afrikaaner while paying lip service to his self-proclaiming and overly-gratuitous explanations. Things did get more interesting however… 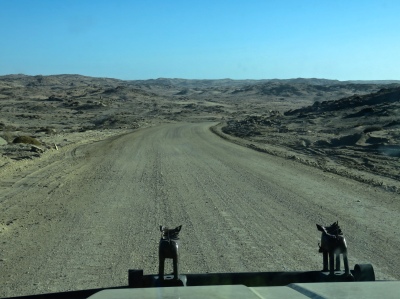 During our excursion around the seaside address, Tucker peeled back a bandage to show us a fresh wound in his neck. He had been stabbed just a few days earlier. He had found himself in a disagreement with a less-petient individual while in a bar in town. Sadly, for Tucker, there was a one armed man at the bar who took it upon himself to try and appease whatever the situation was between the two of them by requesting Tucker leave the premises. His suggestion was accompanied by quickly thrusting a blade into Tuckers neck. Quite the scuffle ensued (yes, the stabbing was the start, not the end, according to Tucker). Understandably, Mr Mono-Hand (I have no evidence of that being his name) swiftly left the squabble, while Tucker headed rapidly to the emergency room. It might now be clear why Tucker exiled himself to the desolate ruin by the sea.

The viced-up strong man eventually managed to march us back to the furnitureless “cafe” after showing us the sand-filled outhouses, the half-buildings by the cliffs, the desolate camp ground, the rusted and weathered tower on the tip of Diaz Point, and the battered and landlocked boat which he intended, in the near future, to turn into some kind of accommodation for dwarfs. For a brief moment, he took in the vast sea view. In somewhat of a contemplative state, his melancholy lasted about three seconds. Touching. 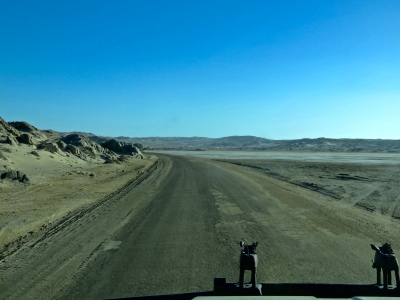 Once back indoors and out of the exfoliating gale, he produced a dead pigeon. A recent incident by the looks of it as the bird was still extremely nimble. Apparently, the shaved, Long John Silver act-a-like had found the injured bird nearby and taken it upon himself to nurse the petrified creature back to health. No such luck. Naturally, in it’s critical state, he thought it would be a good idea to make sure it wasn’t lonely at night. He had tucked the little fella up into bed with himself, so it would have some company and someone to nudge in case it needed the loo in haste. How thoughtful, you must be thinking. Unsurprisingly, the pigeon overdosed on sheer fear and never woke up…or, the big chap rolled over in his sleep and smothered the poor bird, putting it out of its terrified misery. It was hard to understand this part of the story as Tucker’s throat clogged up (maybe it was internal bleeding)… Wiping his nose while oddly kneading the bird and holding it up by its ankles to show us. Naively, he had unwittingly thrust it speedily to deaths door. Condoning such failed actions would be ignorant and inhumane. However, when we heard the story laid out in front of us, we genuinely witnessed heartfelt pain from the struggling, tanked-up Tucker. In the piercing wind, his eyes welled up and he cradled the poor bird in his giant hands. Nobody enjoys waking up next to the pigeon they were nursing, especially to realise they had smothered it to death.

Following possibly the most bone-crushing handshake I have ever entered into, with relief, we left Tucker with the echoing sounds of my meta-tarsals breaking and an ample amount of sobering coffee. It had been a whirlwind of a stop off and one which we were all both dumbfounded and thrilled by! 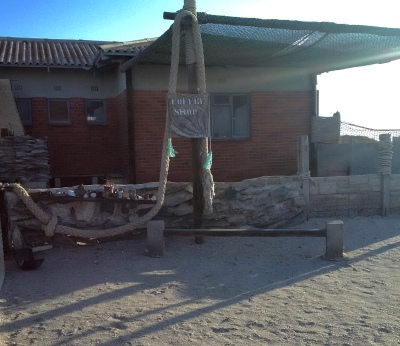 Yes, we had a guest with us. Who said our safaris were dull?

‘Detouring’ back into town; Luderitz is a strange but pleasant place. Not too big and with some industrial spots nearby; only a few thousand people can possibly inhabit it. It is at least 100 kilometres from its nearest neighbours across the sand. We stayed at Kratz Platz – a typical Inn but a rather equipped pad with a quaint and busy restaurant. It also served the biggest eisbein you’ve ever seen! While indulging into the single largest piece of meat I’ve ever been served on one plate, we eyed a quiet man at the bar. We enquired with the innkeeper about this gentleman and indeed, he was the only one armed man in town…

Not too far away is the ghost town of Kolmanskop. We shall endeavour to explore… 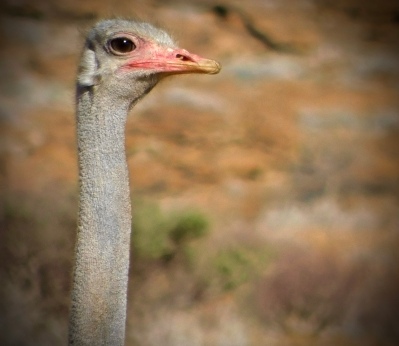