Intimacy with an orally fixated sheep

As if driving on the back of a grey millipede which is missing a few legs, the highway’s industrial limbs appear to be less common as we head north. I wouldn’t normally be so happy to see an insect with its appendages missing, but whichever bully decided to dissect the bumpy-backed diplopoda, I’d like to thank them for their creepy crawly cruelty. Delving deeper into the highway’s heart, we find the wonders of the wild eventually have some habitat.

For our drive over the next couple of days, the Milepost guide details nothing but bridges, rivers, lakes, the odd petrol station, a few disused, dirt airstrips left from WW2, some camping areas and rest stops (just side tracks or turn outs from the road, with a few of them noted to have drop-toilets or bear-proof waste bins at most). Showers are mentioned when they are available, but the majority of camp grounds are dry – meaning they don’t have running water or electric. Some RV parks are attached to petrol stations, which in turn have no showers, limited food options, often seasonal fuel provision (summer fuel only), and occasionally, dial up speed internet solely for a credit card machine. These stops are really only located here for long haul truckers, not for tourists trying to see the north and share it in real time – which we’re glad of.

The amount of “towns” (where a gas station, a gravel space large enough for a few RVs to stop, possibly a gift shop, or place to buy a gun have become close neighbours) are few and far between. It appears there are only two worthy of a mention on about 900 miles, but before we reach either of them, we drove through an area called Stone Mountain. Naturally, there is a mountain…made of stone – the settlers, trappers, and military men that often named most things here weren’t often poets or progressive thinkers, nor did they like to willingly adopt native names. Similar to the U.S. most people just named things after the familiar place they left back in Europe. A spade, is a spade, so a mountain made of stone, didn’t take long to name…
Stone Mountain, more of a large dome (think of a singular, solid, perky, round grey boob) is in an area of baron rock; chipped, rough, crunchy and coarse, colourless and sometimes shear and harsh as we wind around its valley. In fact, it’s nothing like a perky grey boob at all, it’s more like a callus, dry verruca, sticking up from an undulating, blistered and bunion-riddled foot. Splendid, I’m glad I’ve figured out what Stone Mountain reminded me of in human form…
After such plentiful pine scenes, it’s dramatic and surprising to suddenly enter a world of grey stone and gravelly ground. Although a tough environment, lacking in obvious salad or legumes, hardy, wild, Stone Sheep lick the rocks (and often the road) for minerals and vitamins (calcium chloride on the road, to be precise). They also eat the shrubs and whatever they can find around the rocks, but today, I see them licking the gravel as if it’s lemon sorbet. I didn’t try it. One of them also seemed to take a liking to me, and constantly gave me the eye while regularly ignoring both the road, and the rest of the flock. I think she tried to seduce me with her best moves, flirting ostentatiously, flicking her eyelids and grinding her teeth like a twitchy Steve McQueen chewing gum. I appeared to be a worthy distraction from the grey gravel sorbet, but I think she just wanted my milkshake for the yard.

Following my intriguing and intimate liaison with a wild and rugged sheep, some of the cambers on the highway had me thinking, I need some driving gloves! The cambers on the highway for the next few kilometres are off the charts, even compared to the stimpmeter readings at Augusta (something for you golf fans). It was a little bit like driving on a slow Scalextric track that you’d bumped up over a cushion or a cereal box to make it more interesting. Thankfully, it wasn’t nauseating in the cooling midday haze, but like most of the lady friends in my life, we’re a bit top heavy, and lacking leather gloves to be taking the bends like Steve McQueen on a stunt shoot (not sure why Steve McQueen is featuring so regularly today).

One of the two towns to note is Lake Watson. Which was thoroughly disappointing. Clearly struggling to maintain its assumed status according to the guidebook, it appears to be a ramshackle of hotels, shrouded in a few disorientating details of what and where provisions are available. There are derelict visitor centre buildings, a boarded up school next to a rusty playground, and plenty of dust blowing around. There is an odd sign post forest attraction (which actually IS something a little different and quirky, for about 30 seconds) and a couple of gas stations – one of which was completely out of order when we were there. It does have residents, and some of the side streets do have some semi-maintained front yards, but sadly, it wasn’t the recuperating, replenishing, oasis we thought it might be. We filled the gas tank and soldiered on to find a quiet camp for the night.

After enticing an orally-fixated sheep, who undressed me with her gravel-loving, sorbet eyes, and driving around a giant verruca, I feel dirty. A shower is in order. Tomorrow, we should reach the capital of the Yukon – Whitehorse. I have high hopes to cleanse myself! 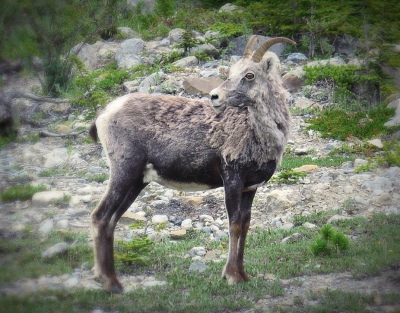