You may need some lubrication…

The strangest, unpleasant, oddly informative and most numbing feelings I have ever had as a tourist.

The shuttle bus escorted a handful of curious people through the oil drilling facilities, and along 26 miles of badly maintained and bumpy gravel road to the Arctic Ocean.
We received a brief description of what was going on, saw miles of endless pipe, dozens of squat buildings over drilling wells lined in crescent formations, the odd fire, burning excess gas from protruding pipes, colossal buildings where salt water and gases are being pumped back into the ground where the oil had been acquired from, the biggest gravel pit (where they retrieve all the gravel and soil to build the land and roads they need to operate on in the bay) I have ever seen, and a new waste landfill site which could swallow a small city. The land here, which we safely travel over, has all been manufactured by the oil companies out of gravel and clay from nearby holes, dug out by busy land-moving machinery. The ground is a wetland for probably around 50miles inland, and should mostly be a sea-level swamp of shifting ice plates covered in thinning grass (roughly just larger than a tennis court). I used to work in the waste management business, and I’ve seen large waste dumps. I’m not exaggerating; The gravel pit and landfill site (of which neither are the first of their kind in the area), have been excavated to build “solid” ground and to dispose extortionate amounts of waste into. They are solely for the use of Deadhorse and Prudhoe Bay, and they would swallow the city of Bath. It was hard to be enamoured by a lot of the visuals.

Prudhoe Bay is the area where the oil is extracted from, and where you need to be cleared by security to be taken into. It covers 350 square miles of natural, icy wet lands, stretching out into the unforgiving Beaufort Sea. This oil rich area would cover almost half of England, and the companies apparently move drills every couple of years in winter time, currently extracting roughly 500,000 barrels of oil a day (42 gallons per barrel). Extraction peaked in the late 1980’s at more than 2,000,000 barrels a day, and has declined at a rate of 5-6% each year.

It sounds extravagant, but compared to oil consumption: In 2014, the United States consumed a total of 6.95 billion barrels of petroleum products, an average of 19.05 million barrels per day. Prudhoe Bay, barely fills a bucketful.

I’m not critical of just the U.S. It is the applied scheme of nations world wide – and BP is the largest stock holder in Prudhoe. Humans do this, and whether you agree with it or not, we all use oil and gas which is extracted around the globe, in everything we do; to travel, commute, mow our lawns, to build our roads, lubricate things, to manufacture nearly everything made of plastic, even cook our food on. Is it right? Should we feel guilty? Should we only be disturbed by the big industrial users, or should we all suddenly stop driving our children to school? Will humans stop using oil if it still lies beneath the earth? Is it actually wrong that we should use it all up before finding some other technology efficient enough to replace it? Is it the best immediate solution to further progress, or do we have a responsibility to not be so arrogant when it comes to resource? Are we entitled to use whatever we have, until our great grandchildren find something new? Are we destined, in the short term, to become walkers again, and will fast travel become a historic thing of the oil age? When is someone going to invent a hover board?! I’m playing devils advocate in my own mind, and seeing Alaska’s oil field and pipeline is brain mangling. It’s like being told that the grass is no longer green, because it can be any of four different colours depending on whoever cuts it, and once cut, there will be no more grass…at all. If we were running out of grass, would we still let cows eat it?

Just being driven through the facility is enough to spark an activist’s fire, enough to create a rebellion, but being driven at all, would make a hypocrite out of anyone here.

I’m told this facility is one of the more environmentally friendly around the globe. With a pipeline sensitive to the creatures and ecosystems around it, and with a facility that moves with the seasons and not just when it wants to, eroding everything in its path. I’m still not sold on the conflicting positives that the facility advertises.

Declining caribou (although many, including me, will argue that the herds cycle is currently in natural decline – part of their forty year cycle – and not reason to blame the oil companies) still migrate through the area, and birds use the wetlands amongst the oil fields. Sounds like a lovely stop off, doesn’t it? Right now, it’s hard to imagine, and apart from a wandering, childish, artic fox, and a few dozen geese, there is no sign of an abundance of life here, other than that manufactured by man. Regardless of a little science and much blinkered narrow mindedness in the face of financial reward and job provisions, it’s impossible to argue that anything wild here, is unaffected by the oil industry. Even though it’s still (barely) a wild habitat; what we are capable of, what I see on these trips, what we have turned the coast of the Beaufort Sea into leaves me with a dry mouth and enough sensations to boil my blood. I hope for the wild, that we won’t leave it as a scarred wasteland, and we remove all of our footprints; which we are reminded by the government, by the national parks and by so much officialdom at every turn across wild America. I can understand why people cry out against our current version of humanity, but I just hope, with a limitless amount of optimism, that when our natural resources are gone, our next defining age will be a much more sympathetic one, and not one which accelerates to a critical end so rapidly by glutinous and careless consumption. I try to stay off the environmental high horse, but after visiting the devil that I now know, I’m acutely aware of the hypocritical knife edge that we all ignorantly slide along. Every. Single. Day.

I can’t say it was an enjoyable experience, seeing the Arctic Ocean under circumstances conjured and manipulated by mankind. The last frontier before the Arctic lands of the North Pole, and we have even stretched out our courteous arm of destruction to places we don’t appear to belong.
It’s a tough nut to swallow, and we will carry on regardless until we have a lucrative alternative, or until we have no choice but to stop living ostentatiously, as nearly all of us currently do. 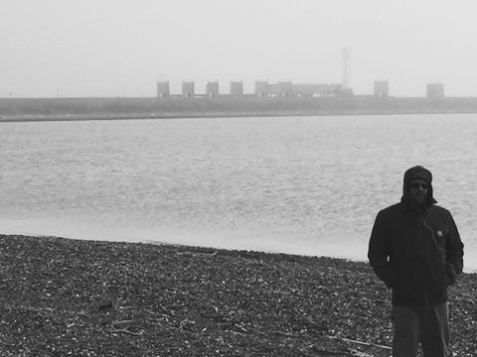