Stranded in storms and falling trees

As relaxing as the woods can be, they’re also a little nerve racking when some heavy storms are forecast and you’re sleeping amongst tall trees. It’s calm but building. Cautiously welcome, the eery winds through the forest feel like they’re bringing something. The overhead gushes and howls in the canopy drown out the rains and the thunder, but on the ground it’s still, quiet, dry and dubious. Dancing dangerously around the dark bark before dawn, it’s awakening like someone knocking and stroking on the door with both ends of a witches broom. Sleeping in a chaotic storm is sometimes thrilling, but waking to a creaking forest, stirring in twighlight, like a grumpy wizard stretching his ancient toes inside his protective shoes. It’s almost inevitable that he’s going to pull a muscle and be hobbling, leaning onto his staff. The noises and the winds which you cannot feel on your skin seem to be carefully delivering a calm wrath between mossy branches and seeping roots. Something is coming and the clenched, eery undergrowth is preparing itself.

I was supposed to leave two days ago, but my ferry is in dry dock after never making it to Skagway. Huge delays on the ferry system and with boats only running maybe twice a week in peak season, there’s now a back log of passengers in various places, with people needing to leave ports which are only accessible by boat (Juneau, for example – Alaska’s state capital). I’m in the dark about a replacement ferry and KP is waiting in Haines in the same predicament. Yesterday I was told I could possibly board a boat and join the car ferry when it reaches Haines, but to compound the problem, no ferries have made it into port today. Cruise ships are waiting out at sea for a calm day to dock and Skagway is a ghost town. 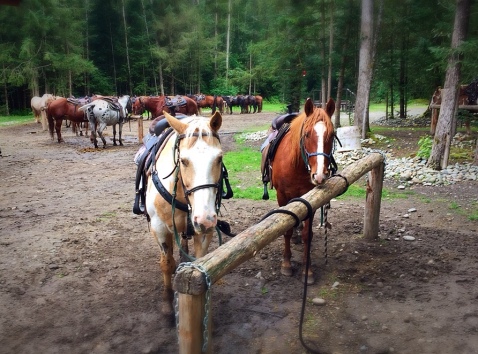 Everyone, especially the horses, have a day off because of the lack of tourists. It may be a welcome respite for some but for me, the storms in the last twenty four hours have meant that I don’t know when I will be leaving….or how.
KP and I have been patient, but another forty eight hours and we might have to drive around southern Alaska to begin the four day road trip south in our damaged truck. Broken boats and storms have us temporarily stranded.

Trees fell like gassed soldiers at dawn.
Amongst the frangible falling branches and incautious goliaths falling unpredictably throughout the early morning, one gust ended a large cotton wood onto my friends cabin – while he was still inside. Spilling my tea and rushing over, imagining we’d be pulling him out barely alive from a wreckage, he stood outside after crawling out from under his bed and thanked the skies that only the large branches had broken on his roof. If a tree falls in the forest and no one is around to hear it, does it still make a noise? Let’s not get into that, but when a giant topples, the aching slow motion of an approaching nightmare plays out in a sound-stretched second. Nullified by the deafening beat of my own heart, the preempted, horrifying agony of it crushing a friend while he sleeps is the only thing that I saw nature capturing as it continued to waltz around the wild. Paranoia was justified, as the momentous winds brought an attempt on life. 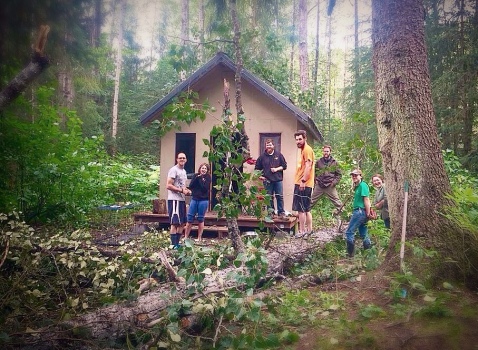