It was a success…. Nobody died!

Beyond the point of relaxation and drifting into a tired trance, I managed to stay up for another thirteen hours after a fifty hour+ sleepless journey from the U.S. to Cape Maclear. Helping my new friends, we made sure the bar had little left and I finally gave in to my pillow of dreams and collapsed under a questionably reliable mosquito net around 3am.

I’ve woken up realising that the reason for the gathering last night, was for management to finalise the details of the imminent and brand new, Cape Maclear triathlon. Generous lubrication is required for every machine to function successfully and I can confidently say, that as I was welcomed to the pre-preparation team-building soirée in the Funky Cichlid bar, every individual involved in the organising of the triathlon is truly a well “oiled” cog. Occasionally, a few spanners in shot glasses were thrown into the machine, causing havoc, but I think things were discussed enough for everyone to understand what’s expected tomorrow when the event kicks off. Unfortunately, I haven’t been able to negotiate many printable details about what occurred at last night’s affair. However, I seem to have been collared into greasing up as a lifeguard for at least the lake swim, and who knows what else. I’ll have to ask the head honcho what I signed up to…and if I can shake this hangover and jet lag with an eggy breakfast and some spicy sauce (sadly, not much chance of a chocolate milkshake out here), it should be an interesting and successful first weekend in Malawi.

I often meet people on my travels, especially in remote, small communities who work tirelessly on new, worthwhile projects. Projects which focus less on financial gain but more on the emotional wealth of the people. Things to breed awareness. Things to educate. Things to improve overall health and lifestyle. Things to unite people with amenities in common. Things to fund sustainable moral and wellbeing.
Events are evidence of the determination of specific characters, but participation of a community is how its strength can be measured.

In Malawian terms, the Cape Maclear Triathlon was a success! Nobody died…..seriously. At approximately 8am (actually starting at 10.30 as this is Malawian time) roughly fifty competitors stepped up to the start line – in reality, the line was a wet one, a kilometre or so off shore in the lake. We “threw” participants off the side of a boat. The swimmers all made it to shore. Apart from a few punctures, the bikes made it round. Nobody collapsed on the run. Part of my workload was to make sure there was enough water around the trail for hydration. A few ringers and I spread ourselves around the unmarked trail, hoping participants would find us….most of them did. The police showed up, but instead of helping us to direct traffic and set up road blocks, they drank a few bottles of the athlete’s water (although originally asked us for beer at 10am), as did a random villager, cycling past with his handle bars and back shelf stacked high with firewood. Not exactly what you’d expect to see on the track of the London marathon, but this is Africa. 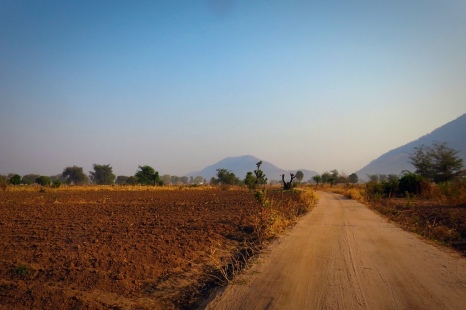 In the afternoon heat, there was an extra two kilometre swim from Thumbi Island back to the shore of the national park. It was more of a locals event with the majority of the field made up of lake side villagers. I think some saw completing it as a right of passage into manhood and there were a couple of hundred locals swarming on the beach to see if anyone drowned….I mean, cheer on the avoidance of death. Life guarding went well and with a handsome bakers dozen starting out, eight cramped up, then a handful of shaky souls avoided the fishing nets to finish on the beach. Thankfully, nobody needed resuscitation. In an environment over thirty degrees centigrade with no shade, in a lake where people regularly disappear, in the hands of two kayakers, a couple of jet skiers and lifeguards like me, everyone survived and the event will be on again next year. Not an event I knew I would be involved in prior to arriving, but rather a baptism of fire immediately after the journey to get here. Time again to lubricate, time for beer.

to find out more on the cape maclear triathlon, Google it, or search for its facebook page