Jealous of my lifestyle? Read this one

Three sounds concerned me as I tried to fall asleep in the Kasungu bush. One, chickens. They shouldn’t be here. Two, gunshots. They weren’t for the chickens. And three, the sound of snoring. Nobody needs to hear that, especially any encroachers with their weapons. It’s also as hot a sauna, and I don’t fancy being dragged from my tent in the early hours by some disgruntled poacher at gun point, nude. However, I’m sure the military put up with worse…
People I meet around the world have often told me how they wish they could do what I do, wish they had the balls to change their life for something more adventurous, wish they had the opportunities to live a life on the road…I’m fairly confident that trying to fall asleep in this scenario is one of those moments they’d all love to swap their temperature controlled, safety-conscious, spacious lifestyles for. So, to the sound of erratic guns less than 100yards away, to the odd cluck of a misplaced chicken and to the occasional snore of an enthusiastic but exposing ranger, I try to nod off in a sweaty puddly of my own nerves.

Camouflaged in the bush, we’re hoping the backdrop against the flat forest is enough to hide us from view. There aren’t any trees large enough to hide behind nor are there any rocks, boulders or mounds to huddle up to. In a somewhat dense but relatively easy to manoeuvre around bush, our silence in the night is our only cover and I hope any of our noises are drowned out by the sounds of the nearby social poultry.

Once asleep, I’m far from at peace. I’m only awakened twice. The first is by the sound of some creature urinating on the corner of my tent (still not sure what the flippant animal was. I froze as I awoke, pondering the thought of a stone-faced, pissing, machete-wielding Malawian having the last laugh over my canvas and eventual, lost carcass). The second awakening, was to the noise of a nearby growl (or at least, an extremely loud purr). Doubtful, but maybe a wandering lion. Silently, I questioned it, and was comforted and reassured in the assumption it was likely a curious leopard. However, in my dazed and dreamy discomfort, as quietness blessed the forest, I lay in the sweaty concern that it could have just been Christopher grinding his teeth.

Unsurprisingly, it wasn’t difficult to rise before dawn. The temperature quickly increases and wildlife soon creates a surround sound which means sleeping in is only for the deaf. We have plans however, and catching any illegals before they awake is likely the safest way of wandering into an armed village. Whoever is there at day break, amongst the sun-bleached trees, the drab mud huts, the branch-constructed shacks, and who knows what else, I’m confident they won’t be pleased of our arrival.

After packing up our gear and camouflaging it under some nearby broken, prongy boughs, we stealthily but swiftly walk the 100 yards or so towards the dwelling. Silent, light-footed, aware, and if I’m honest, fearful, we have no idea who or what we might find. After hearing the gun shots through the night, it’s hard not to feel the adrenaline as I focus hard on staying quiet and looking out for life threatening dangers. Anything could come storming through the bush from any direction. The feeling of being exposed and vulnerable is much more heightened than yesterday and there’s an eery silence as we wander forward like sinister foxes (although we likely look more like a few furtive ostriches carrying some blades and dressed in camo). We’re not just stealthily creeping through the bush, trying to be covert, we’re nearing an illegal village, known for harbouring armed poachers. A single mud hut with a few surrounding shacks made up of thick sticks, plunged into packed earth is all we can see. No construction has a rain-proof roof over it as being topless in the heat keeps things cool. There are areas where food preparation and washing has been carried out. A stock of roughly a dozen, large sacks of grain are piled up outside the main hut. This could mean many things, but it is a sure sign that a vehicle has been this far into the bush. These people are either farming extensively, likely for commercial reasons or have stocked up. Half a dozen chickens freely roam around the place and the construction and condition of the buildings show that people have been here for many months. 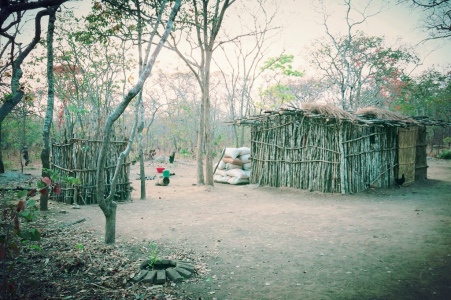 A part of me sympathises with the forest folk, but they have moved here and encroached onto sacred land. Sacred for wildlife and a project which is trying to conserve the culture of a country, fighting against an immediate and destructive scramble for resources. In this day and age, immediate gain isn’t just a western way of life, it’s seeped into the most remote lifestyles on the globe.
Beyond this hut are a few square kilometres of illegally logged forest, easy hide-outs and poacher-harbouring shacks full of families which are scratching the wilderness off the face of the Malawian map. It is protected land, although sadly at the moment, due to an apparent absence of government urgency, the protection and policing consists of very little. Right now, the ecosystem only has Bjorn, Christopher, our suspended Frenchman at base camp, and myself. Although is will hopefully change in the next few months. Creeping through the trees, towards the shanty-bush dwellings, I feel a strong pang as a thorny bush rips along my rib cage, into my shoulder and up through my arm pit. It’s a stinging sensation as thorns tear into my flesh and although frustrated, I try not to be distracted. It’s just a flesh wound. I’ll have to apply some alcohol soon. It all becomes quite real while I’m holding a bush knife which presumably might save me somehow, and my pale flesh is painted in dark oil colours like a sort of gory Frances Bacon hung next to a bleeding armpit. We’re acting out what Rangers should be doing every day in order to protect their culture and it’s hard not to feel sad about the whole situation. A lack of resources, manpower, funding, and care, means the wild is disappearing….fast.

The three of us position ourselves appropriately as we surround the hut. We keep watch and enter to awaken the sleeping bodies inside. Let’s not forget, we are not here to injure or harm. We’re here to find illegals, find who is truly responsible for what is happening in this area and to inform the police who hopefully CAN do something about the situation on a more substantial scale. The weapons we have, including Christopher’s rifle, are only to be used if we are shot at, and to make arrests easier should we need to make one. We are not here to intimidate, but unfortunately the true militia who are found in the wild won’t think twice about maiming or mutilating another human for their own gain, or escape. It isn’t too difficult to make a body disappear in the bush and home made ammunition isn’t hard to come by. Sometimes you even see it lying around on the floor. It’s easy to assume that firepower gives you some kind of leverage in these communities – it does – but the fact is, the dangerous individuals in these situations appear more afraid of witch doctors and black magic than they are of flying bullets. Threaten them with a gun and they might attack with a machete. Threaten them with being cursed or tell them that an area of land is full of dangerous spirits and they’re more likely to be fearful for their lives.

We enter the hut, but only to find two children lying in their strung up, hammock-like beds. Quietly, Christopher translates and they tell us that their parents have gone to find a vehicle to move out of the forest. They have older sisters who have gone to gather water and we don’t know if their water collection will take a couple of hours or an entire day. We can’t assume when they will return.

Of all the scenarios, I didn’t expect this one. Kneeling in an illegal mud dwelling, with farmed supplies and poultry outside, two quietly scared, barely awake toddlers are in front of us with no knowledge of when their parents are coming home or what we are doing. We find ourselves oddly confused about how to proceed. Child snatching can never be considered – this isn’t Chitty Chitty Bang Bang! We need an adult, preferably one with knowledge and who is easy to apprehend. We also need a situation which isn’t going to alert our presence to the nearby villagers – of which there could be hundreds towards the vague Zambian border less than a kilometre away.

We quickly disarm the house. Hiding, dismantling and blunting any dangerous equipment that could possibly be used against us. We substitute our own smaller weapons for axes or farm tools and we scour out holes in the mud walls to make it easier to watch for approaching people. We’re on the very outskirts of the encroached park. Extracting someone from here will be much easier and safer than wandering into a more dangerously populated area. We hear noises down the dirt track, further towards the illegal village. Assessing that the children are of no threat and won’t leave their beds, we carefully flank an approaching cyclist. Casually making his way from somewhere deeper in the bush, it’s unclear why he is approaching. We quietly ambush him from the trees and thankfully, as he sees he is out numbered, he quickly and quietly does as he’s told. We remove the sharp farming tools from his person and escort him and his bike into a nearby mud hut which is currently under construction. This guy clearly isn’t an obvious threat, nor does he appear violent or eager to run away, but he knows he’s been caught and is aware he is guilty.
Apparently fearless, as if this kind of thing is a regular occurrence (I guess it is when you decide to live and farm illegally inside a national park), the man answers our questions with a definite aloofness. However, he has an interesting story. It’s enough to keep him in handcuffs and to walk him the eight kilometres through the bush, back to our discreet extraction point. It’s a long and quiet walk. It’s a more direct route than the one we took to get here. However when we find ourselves in familiar territory, we find footprints which must have directly followed us yesterday. If we lost them in the denser bush, I’m grateful, but at some point in last 12 hours someone was definitely aware where we were and which direction we were heading. This isn’t surprising, but more on the theory of that later… Within five or so hours, we are able to push our radio equipment into the canopy of a tall enough tree to make contact with our Frenchman. Without serious injury, but with plenty of evidence to further the obligations of the anti-poaching unit and police, I’m hopeful we’ll be out of here soon… 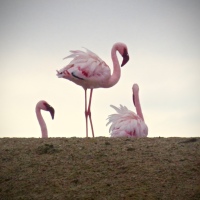