Hopefully, without getting shot… 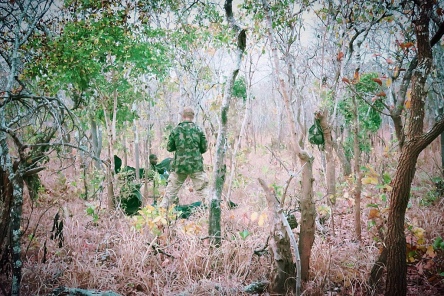 Hopefully, without getting shot, stabbed, sliced with a machete or even just damaged by anything in the bush….

After an early start to pack our bags with appropriate and thoroughly checked equipment, we had to wait a few extra hours for the ranger to show up. Here, timekeeping is a rare skill and even if it’s possible, it’s rarely used. Albeit frustrating, one should rapidly adapt.

It’s mid morning. We left the anti-poaching base unit in Kasungu National Park following a good breakfast and enough water to satisfy three camels. It’s not the first time I’ve taken hydration seriously, but as we’re heading off into the bush in the midday heat, it’s all the rage to mix up a few hydration sachets. I don’t want to collapse after twenty minutes, stuck between some prickly bush and an unsympathetic hippo. I may now however, be full enough to mark the entire north end territory of the park like an enthusiastic wolfhound, but rather than become carrion and being found lifeless by a hungry hyena, I’m preferring to sweat and overfill my bladder in order to survive the African afternoon. Survival would also be preferable because even though there’s no chance of an ambulance, nobody wants to find my dead body while I’m wearing my classy, anti-chaff lycra underwear. Not even the hyenas. 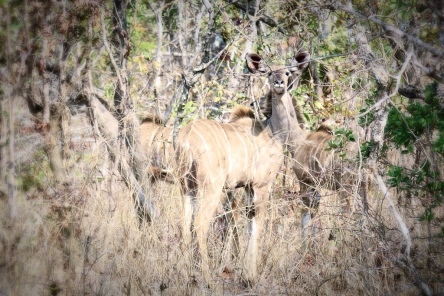 Matt drives Bjorn and I, with a tag along but enthusiastic ranger called Christopher, into the bush along a dusty, bumpy dirt track, deeply nestled into dry swathes of shrub and thorny branches. We’re in the heart of Kasungu National Park, heading towards a couple of currently invisible rocky outcrops not far from the Zambian border. We confirm our extraction point and covered in camouflaging oil paints, head off into the grass looking like Quentin Blake has used our bare flesh in lieu of a few pages of his sketch book. Our mission is simple: to hike towards the highly poached/encroached area, to assess the situation, hopefully make an arrest, and hike out to the extraction point with a baddy in custody either tomorrow or the day after…without getting shot, stabbed, sliced with a machete or even just damaged by anything in the bush. Personally, I hope to see some wildlife, but as remote as we will be, I’d rather not wake up with an affectionate mamba at my side.

Unfortunately, Matt is currently suspended from his armed duties (after catching a ranger for the third time, his frustration got the better of him and he roughly damaged the man’s pride who was aiding poachers….again). The park authorities found it suitable to only give the ranger a verbal warning (again) before sending him back to work. However they suspended Matt and his weapons until further notice. Sadly, this is the state of Malawian beaurocracy within the national park system. Matt has been paralysed against any armed poachers. As a result, it will likely be weeks if not months before the government/parks department allow him to protect their park and give him his equipment back. Sound crazy? Get used to it.
Matt is to be our transport to the drop zone and hopefully we will be able to reach him by radio once we return to our extraction point. Due to the anti poaching unit being entirely funded by charitable donations and volunteer military, communications currently aren’t easy in the park. We hope we’ll have communications working when we need to exit the danger zone, or it’ll be a long walk home. There are of course, government funded ranger stations and armed guards. However, evidence of these men being a) military trained, b) sufficiently equipped and c) efficient, is sadly, lean. On our mission, Christopher is allowed to carry a gun. Don’t get too excited, he should undoubtedly be able to stop and possibly kill a poacher should he have to (in self defence), but his weapon isn’t nearly enough to take down a charging hippo or elephant. The real weapons which come with a shoot-to-kill poacher policy are in South Africa. Sadly – but some might argue to stop escalations getting out of hand – Malawi does not have such extreme protocols. With Bjorn’s army training and my extreme unfamiliarity with weaponry (it could be a blessing), we’re stealthily wandering towards a heavily poached region. We’re told that the area has been grossly encroached upon. Some of the illegals will be armed, if not with guns, with plenty of blades and farming tools. All Bjorn and I have between us is a machete, three bush knives, a few tins of food and our evening shelters. We may sound naive, but please trust me when I say we’re slightly more prepped and aware than I’m making out. I even smuggled along some boiled sweets!

After a few hours of map reading and negotiating on foot the very flat landscape amongst the trees, we were glad we were also taking our readings from our GPS unit. However, we realised the landmarks located in the device were out of sync with the map, and more importantly, the sun! Deep into the sweaty bush, we spent a few minutes failing to locate ourselves on a pretty poor map, and we turned off the GPS unit which none of us could agree on. We did however, even on the considerably flat landscape, surrounded by trees and sandy soil in every direction for a few dozen kilometres, know where we were were. The encroached area was in front of us for a few square kilometres and we could roughly position ourselves because we could see how far we were from a couple of the large volcanic hills near the Zambian border. Stealth was paramount, as was knowing which direction was the fastest way away from human danger.

The first four hours; we had hacked our way through some aggressive bush, (to avoid being spotted) quickly crossed a dried up, recently burnt, exposed river bed, hiked through a few kilometres of thinning, thorny forest, and listened to our loudly crunching footsteps over crispy clumps of grass. We stomped across the ash-laden ground of the dry season and after an hour or so, we find ourselves flanking a few illegal dirt roads, avoiding to leave our own footprints in the dust. We have followed fresh bicycle tracks towards an area we’ve heard is highly populated. That’s right, illegal aliens have brought their bikes into the remote areas of the park, AND worn in some roads to come and go across the Zambian border. Close by, we also just heard chickens. Unsurprisingly, wild chickens don’t exist in national parks. Guinea fowl, yes, but they don’t cluck like some lost, leopard’s pick and mix. The egg-loving illegals are nearby.

We’ve found areas within the park of cleared forest which have been turned into acres of casaba farmland. Alongside the felled trees, we see human foot prints in the dirt where they have no legal reason for being. Much bush has been semi-burnt and left to rot. Hacked trees, lying around do appear strange, but poachers brutally destroy them across the parkland to eat the giant caterpillars that live in their branches. They’ll likely return later to gather the dry wood to burn.

Although a huge concern, ivory poaching is just one issue here. Habitat and food sources are being ravaged as villagers and poachers encroach into protected areas. Illegal living, farming, tree felling, border crossing and hunting is more damaging to the entirety of the park and has irrevocable knock on effects for the elephant and mammal population – as well as the surviving human populations around the park. Illegal fishing is one of the biggest problems in wet season and unsurprisingly, fatal accidents with hippos are not uncommon all around the country. Essentially, although the famous ivory poaching is endemic and threatens all walks of life, it is simply illegal living that ironically threatens life as a whole.