Nostalgia, some dreams, and the colour of my crotch.

It’s the city that never sleeps. Although New York might have been better named, the city that can’t keep its mouth shut. It can’t be quiet….at all.

I’m normally one for coming prepared, but after a day in the rain and still suffering from a little jet lag, I threw on the wrong trousers. A crowded, cycle-dodging hike over the Brooklyn Bridge to City Hall in Manhattan, was made all the more uncomfortable, knowing that four hours later, the colour of my crotch might resemble a fine Pinot Noir, or maybe just a sunburnt sow.

The rebuild of the Trade Towers following 9/11 seems to be going well, and the queue outside tower one for the new city scape observatory was already 150 deep before lunch. I might be British, but queuing isn’t my thing, so I meandered up the riverside and scoped out the view of neighbouring New Jersey. Ticking off all the tourist spots, something I normally try to avoid, the Statue of Liberty seemed tiny. She may stand for freedom and friendship, but after seeing some of the recent images of Hurricane Sandy, in this area of ferries and schooners, in comparison to the modern skyline, she seems to have had her pride dented slightly. Much like the rebuilding of the trade towers however, New York (and most of America) is all about making a point – and the Statue of Liberty (gifted to America by the French) will always be a point well made.

Not that it was on my list, honestly, but as I wandered past, my friend Nick pointed out that I was on location, of Sex and the City. Sarah Jessica Parker still lives just a block away from her home in the TV show. The red stained architecture amongst the leafy streets is a grand delight, but even with the nostalgia of the industrial set and the rather brash stature of the buildings, it doesn’t raise any envious feelings towards the austerity that dwells in these burbs. Like in any hungover city, there’s a sleepy old district which can’t escape the constant renovation or extension work that needs doing. It constantly oozes in a rather vulgar fashion out of the pockets of the wealthy that live, sorry, probably occasionally stay here, making statements which seem a little inappropriate in certain quarters. In this respect, it’s no different to every other city. All of New York, is under construction. 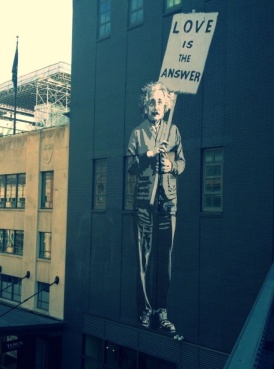 After some lunch, I walked past the hipster-riddled High Line walkway. The area still hums of a bygone industrial era. The now, gentrified meat packing district, the train terminals on the docks, the factory buildings which are now being regenerated into hip, multimillion dollar apartments, strongly hint at a hard working history. It’s recognisable for what it was, but to take it in now, is to also swallow whole a fist full of street art on route, with an ice lolly and a camera. The museum that we are now walking through would have been a stalwart of a tough city backdrop, on which the thousands of immigrants and blistered workers would have toiled in. It’s pleasant along the industrial walkway, with it’s nods to factory life in the form of artistic interpretations of an industrial age, but it’s a little strange to see an area which once broke backs and made children into adults, be turned into what it is now. The designers and the hipsters, the organic grass drinkers and the office workers who have never even held a hammer, are in someway glorifying the good old days, but with that, losing the grit and the doggedness of why it is in fact nostalgic in the first place.

After walking back through familiar territory near the smaller-than-expected Madison Square Garden, I ambled for a couple of miles through Central Park. The iconic, man made green space in the middle of the city covers 900 acres. Nick drives the horse drawn carriages for the romantics amongst you, as well as working for the mounted park police. We stroll around the summer walkways, dodging the cyclists (which Nick points out are constantly breaking the rules, but he’s trying to relax) and discussing the surrounding buildings. I recognise the one from the Ghostbusters movie, but all of the high rise blocks provide a dramatic back drop to New York’s important breathing space. Even if I did see a pigeon with a hypodermic needle stuck in its back – reminding me again, that there is either plenty of bad love in this world, or some pigeons of New York are making some drastic lifestyle choices. Even with the sad state of a pigeon, it was a welcome walk after pounding the streets. 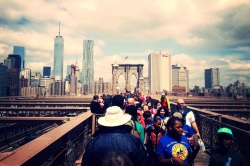 Three nights and two days exploring, and I’ve covered over a marathon of miles, taken in some of the most notable landmarks and meandered around historic districts, as well as some of the more modern pathways. The vibe in New York is typical of a big city. It’s fast paced, it’s loud, it’s relatively confrontational, a challenge, it’s an effort to do anything and it’s flippant about overcharging you. Keeping a precarious eye on what’s behind you is helpful (although New York is one of the safest cities in the world), and there’s always someone who thinks they’re more important than you. People may be a fluster in the middle of having a bad day, yet their catchphrase is to always “have a good one”.

No stranger to a big city, I find them fascinating, but only for short periods. New York is a complete spectacle, and it’s impossible to be bored with so much going on. I would need six months to even scratch the surface of such a metropolis, but I’ve managed to indulge without cramping myself, or trying to fit too much in. Much like certain relationships in life – healthy because we spend a lot of time apart – cities and I have come to a similar understanding. People come to New York to realise their dreams. Mine, is to happily leave.

2 comments on “Nostalgia, some dreams, and the colour of my crotch.”