Whitehorse: An update for lovers….of murderous horses, my toilet time, and history

Arriving into a city isn’t normally such a wonderful thing, but since leaving dusty, Dawson Creek, Whitehorse is strangely, rather comforting. There are crowds of people, even in the rain. There is traffic to negotiate, and various city aromas fill the air (it’s amazing what civilisation stinks of). There are numerous places to fuel up, an abundance of groceries stores and street after street filled with all manner of ugly, fabricated grey buildings; selling all kinds of plastic that we’re told we can’t live without. I can see people using their mobile phones (which really has been a novelty for the last 895 miles). There are small cars and not just trucks or farm vehicles bumbling and crawling through the side streets. There are grumpy people everywhere as we negotiate the crowds for information. The cues don’t hold anyone up for more than ten seconds but it’s enough to hear a few gruffalos…they should try London, New York or Beijing if they really want to feel the hustle….you get the picture. So, why so comforted by the city? With not too many details surrounding the event, I get to use a toilet which doesn’t require a) a trowel, or b) a chilled updraft, from a cold seat over a remote abyss.

With Whitehorse being the only city I’ve come across in just short of 1000 miles, I looked into its past. I’ll try and keep our history lesson brief…

Whitehorse is named after the rampant rapids on the Yukon River which resembled the flowing manes of charging white horses. At last, a creatively-named place on the map! The surrounding area (Klondike) was busy with First Nations seasonal fish camps for several thousands of years, and in 1883 the U.S. lieutenant and explorer, Frederick Schwatka (remember the name), observed the presence of a portage trail used to bypass Miles Canyon and the dangerous white horses that charged around in it. Several different tribes passed through the area seasonally and their territories overlapped. It was a crucial location on any native migration. 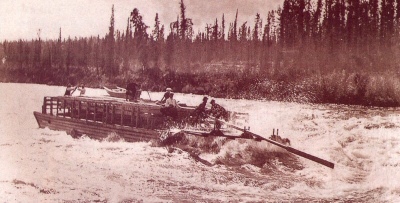 In 1897, two entrepreneurs capitalised on the obstacles of the Canyon and the murderous horses, and built tramways on either side of the river (you know, the one which different tribes had been freely using for thousands of years, even when likely at war with each other). For a fee, their horse-drawn tram cars carried goods and small boats around the treacherous stallions on log rails. Canyon City (a small town made up of tents and shacks) appeared at the head of the tramway with a roadhouse and a saloon providing lodging and refreshments to the tens of thousands of gold seekers trying to strike it rich in the Klondike – much like those tacky 80’s game shows, only with a shovels, dynamite, and pick axes, instead of rainbow shell suits and shoulder pads.

By July 1897, crowds of neophyte stampedes had arrived and were camping at “White Horse”. Canyon City was busier than Maceys on Black Friday, boats were disembowelled by the river on a daily basis and five people died trying to negotiate those river-dwelling venus fly traps – all for just a stab at finding some practically “useless” shiny element.

After thousands of years, the First Nations’ (as we call them now) fish camps were forced to move along the river after inevitable friction with the capitalists and western traders. Even the Indians who traded furs throughout North America with westerners (a hugely popular assignment) often lost their quarrels with the white man fur hunters and officialdom. Without making the Indians across the continent sound like saints (there was frequent, brutal tribal warfare), coming off second best was the norm when all westerners were interested in (in the Klondike) was the shiny shiny in the ground. Across North America, acquiring more land to do whatever they wanted on it meant the inevitable decline of an ancient culture.

The rush for gold in the Klondike before the turn of he century was like Wall Street in the late 80’s, yet the real profiteers were the people that bought and sold the claims to land, and not the gold diggers at all. In order to travel north, into the Klondike for more gold, people had to travel by boat – and after they had experienced a not so enjoyable sea journey, then traversed mountains and mosquito-infested bogs to get here (it was pretty hellish when they arrived too) – many jumped aboard the paddle steam boats to Dawson City.

At the time of extravagance, romanticised pioneering into the Klondike became an assumed luxury. Boarding the steam-powered paddle boats, beyond the dampening, equestrian hit men (we’re still talking about the rapids), were not only gold hunters, but high society looking to enjoy a 36hour ride between Whitehorse and Dawson – often through the summer nights, without it getting dark. The Klondike was a hive of industrial opportunism, but few made their fortunes as they ignorantly enslaved themselves to the mines and the harsh Yukon environment. Most actually arrived on a prayer, realised all the gold claims were already bought, so sold their survival kits which they purchase before they left, and headed home. It’s reported around 40,000 people rushed for gold, only about 4000 unearthed any, and only a handful actually became rich. Most money earners drank, or gambled it all away, dying penniless. It was an extremely tough life, especially surviving on biscuits and beans in the winter. Yet young men and even some families moved here solely for opportunity. Eventually, after a few years of hardship and toil, a new railway was completed from Skagway in 1899, and large corporations took over with their machinery – doing the work of hundreds of miners. For the next 50 years, large business and government were the only real profiteers, unearthing much of the seemingly useless element for millions of dollars. The rich, rugged miner as always, was a romanticised fairytale.

For years, Whitehorse continued its role connecting rail service with riverboat traffic to Dawson City. In 1920, the first plane landed and until 1942, river and air were the only way to get to Whitehorse. When the U.S. entered World War Two, the military decided an interior road would be safer to transfer troops and provisions between Alaska and the U.S. mainland (sailing provisions up the west coast was too close to the praying mantis arms of Japan). In 1942, the entire 2,500 km (1,553 mi) project was accomplished in just eight months. However, by the time the highway was finished, the threat on the western front was diluted, and the road was little more than an engineering accomplishment (and my safe passage to Whitehorse). The Canadian section of the highway was only returned to Canadian sovereignty after the war.

The boom in Whitehorse ceased by the end of World War Two, but it’s location is central to communications and transportation through the Yukon. In 1953, after the construction of the Klondike Highway (which took over from the paddle boats to Dawson City), Whitehorse was designated the capital of the Yukon Territory when the seat was moved from Dawson City. In 1957, the name was officially changed from White Horse to Whitehorse, and the construction of the hydro-electric dam has now created Schwatka Lake reservoir, taming Miles Canyon. The killing river bandits and charging white horses, with their flowing manes, no longer exist.

I recently watched Never Cry Wolf (one of KP’s favourite Disney films of the 80’s) which poignantly reflects on the effects of a human observer on the wild. Mr Schwatka has a lot to answer for, as well as a lake named after him, and maybe because of him, in Whitehorse, I have a toilet without a trowel.

It seems only right that after this education and well appreciated rest stop, we head off on a romantic paddle boat ride. Sadly, as the boats are no longer running, we’ll have to take the Klondike Highway – to Dawson City, which, if you were paying attention, was where the gold stampeders travelled to from Whitehorse.

Much like the native fishermen, I’m not interested in any shiny shiny, but in Dawson, is the start of the Dempster…