There have been no obvious critters from the start of the Dempster, all the way to the Inuvik (750Km). The caribou cross the road twice a year on their migration – once in spring and once in autumn – but despite appreciating their time keeping, I’m slightly sad I won’t see them. It’s also correct to assume that all the other large animals (bear, elk, moose, wolf, fox, deer) have all gone on their summer holidays too. As much as The Dempster, so far has disappointed on the wildlife front (although served up super-sized portions of insidious bugs), I’ve certainly not been short of surprises.

The scenery on the way south is naturally much the same as when we drove north (on the same road). However, I wasn’t quite prepared for what the Arctic threw up. Not only is the climate in summer like a sauna (at least in the southern section of the Arctic circle), but the swarms of mosquitos were an unwelcome surprise. I genuinely felt outside of my comfort zone in the endlessly vast swamp tundra, and although it is utterly beautiful, the land offers no mercy. possibly the saddest, moral denting blow on my trip so far, was not seeing any large mammals, even in summer. To me, this gave me no encouragement or reassurance to mimic any kind of survival. Believe it or not, it’s not always gin and tonics, or endless bacon on these challenging adventures and oddly, when I don’t see wildlife, it silences my voice box and over stimulates my contemplative mind into wondering why anyone would come here. If nature can’t survive, how can we? Ultimately, it’s down to the caribou, and twice a year was enough for the first people’s to maintain camp.

Except for a few common birds and bugs that insisted on puncturing me, I was a little deflated, but Mother Nature had a decent repair kit and a surprisingly good pump just when I needed it. We reached the second free ferry crossing, just south of Fort McPherson. Suddenly, on the river banks, like a surprise party, hoards of birds showed up, each bringing their own keg! If I was interested in birds, I’d have been twitching more than an ornithologist on MDMA. As it was, I was still pretty excited. The cliffs erupted with swallows trying to save me from the hoards of mosquitos and mammoth-sized flies. Red-faced stalks imitated the front cover of the Abbey Road Beatles album. Multiple bald and golden eagles shared their picnic and bathed together on the shoreline like 1920’s flapper girls in woolly bathing suits (ok, so I’m exaggerating….they didn’t have any suits on). Ravens acted like Fagan’s band of pick pocketing boy-thieves, carefully snatching whatever they could from the raptors, and grouse darted about like nervous jewel thieves after a heist. Making the most of the bird frenzy, and as much wildlife as possible (I hadn’t seen much to get excited about in four days), I decided that we’d have lunch by the river. I was quite contented that we had at least a solid hour or so of massive eagles and hot bird action, but a few more miles down the road….

At first, I thought I was watching a small deer in the distance, tentatively checking its surroundings or maybe it had been misplaced by a careless parent, but as if my desperate whispers into the woods earlier in the day had been heard, on the edge of the tree line, with his tail and head angled down and his eyes fixed into an upward gaze, a curious wolf was poised, and looking straight at me.
A wise and calculated glance, checking into my soul to see if I was a threat. Clearly, I’m a massive, bearded, clothed-caribou to him, with an aura that screams excitement; who may want to go running with him until I clumsily trip over and laugh while rubbing his chops like some awkwardly proud desperate friend. Clearly, he’s too cool for those kinds of shenanigans. He bobs his head, twists and takes a few sidesteps – as if I was warming up for Saturday Night Fever – his eyes never flickered and silently, he walked into the shadows. I’ve seen three wolves! THREE WOLVES! For that alone on this adventure, I can quote Tyler, from Never Cry Wolf; “I Wish I could say thank you, just so, straight into the universe”. 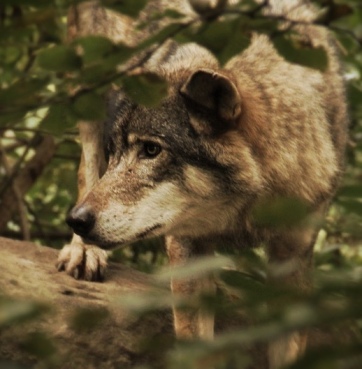 I didn’t take this, but it sums up my experience perfectly.

It rained heavily when we left the Dempster and refilled with fuel from the Tardis KP was so familiar with. We found a fishermans road about 35km east of Dawson City (and only about 40km from where wolf and I went our separate ways – maybe he’ll come for dinner). Our camp spot was a hidden treat, and a few grayling were caught and released before bed. Tomorrow, I expect an interesting time at customs again, on my way back into the states. Canada, it’s been emotional.