The kinky snake is as long as Great Britain (just over 800 miles) and transports oil from the Beaufort Sea in the Arctic, to Valdeze on the southern coast. The Trans Alaska Pipeline split the state from top to bottom in 1977 and was the most expensive, privately funded construction on earth. Although I can think of a few ancient constructions that may dwarf and match the pipe for controversy, and (especially when the oil does run out) that are also likely to withstand the test of time a little better (the pyramids, the Great Wall of China, Marge Simpson’s hair). The pipeline is a renegade titanic among privately-funded constructions, a colossal in the industrial modern age, and evidence of what lengths man will go to if the pay off is great enough. Just in case you enter a pub quiz anytime soon, the pipeline is dwarfed by the Great Wall of China, which spans over 5,500 miles!

The pipeline befriends the Dalton Highway as its journeyman from Deadhorse (in the north) to just north of Fairbanks (for about 490miles). Technically, Deadhorse is not on the coast, so is not our most northern target. Prudhoe Bay is where a controlled oil facility operates and in order to get to the coast you must make a request, be vetted, pay, and then take the escorted American shuttle to the sea. At one of the most remote locations on the U.S. map, it all sounds a little officious, but this is James Bond stuff. Issues with this facility or damage to the pipeline effect economies around the world in a matter of minutes (and has done). 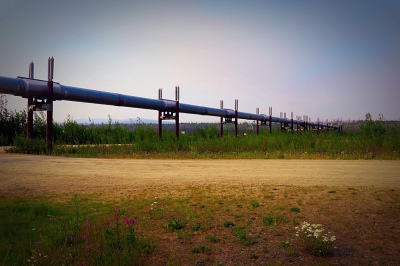 It takes a week for the oil to travel from underneath Prudhoe Bay, almost 900 miles south to Valdeze. From there it is mainly shipped back to the congruent U.S. On its journey it rides mountains, is stilted over frozen permafrost and uneasy tundra, weaves between fish-filled lakes, tunnels under gushing rivers, and is methodically maintained to negotiate creeks, gulches, sliding soils and squelching swamps. The pipe wriggles and heaves like a python digesting thousands of satchels of sassy seagulls daily and is constantly monitored and fed to keep it alive. Naturally, there is the wilderness to consider when building such a monstrosity, and although it does obstruct the view, efforts have been made so it disrupts wildlife migrations and the physicality of the landscape as little as possible. It is also vital that the pipeline does not thaw the permafrost, as this would be devastating not only for wildlife, but for the stability of the land. Water flow would be effected, the ground would split and crack, inevitable landslides and shifting soils would create havoc, and the pipe would also need to be saved from causing limitless problems as it sinks and seeps slowly into a muddy sink hole. The pipe is raised high enough so creatures may pass under it fearlessly, and both sensitive radiators and insulators are attached to it to avoid it melting the ground. Maintaining the pipe alone employs more than 900 workers, and even more for the road to reach it.

It’s not really my bag, but in short, I would be neglecting a pretty large landmark on this trip if I didn’t mention it. If you’re a fan of pipes, or indeed oil, it’s an engineering Goliath which influences our world. (As much as I can debate economics and modern politics, and KP and I often do) I was more interested in the few wayward seagulls perched and crassly gossiping on its length. The fat, tasty looking ground squirrels scurrying around it, as if they were late for their third breakfast also caught my attention. While fishing next to it, I also caught a Burbot, which for me is a new species of fish, and that put a massive smile on my face. I’m not totally useless when I wield my rod after all.

As for the politics of a pipeline and the oil that it transports, that can wait…I haven’t seen Prudhoe Bay yet.