To a certain degree, the Central Kalahari Game Reserve is now familiar territory. While the weather appears to be so consistent in the CKGR, it is astonishing how different the desert can look and feel after visiting it multiple times. No matter what the conditions, or the wilderness, it always demands total respect. This landscape is certifiably one of the most demanding I have encountered, and it’s simply awesome.

On this occasion, we’re reminded of what a joy it is to have clients who really appreciate the little things as much as Bjorn and I. It’s a strain when some people only want to see specific things and constantly remind you of their desperate desire. This is the wild. Nature is dynamic. We’re not on a game farm, private reserve or oversized zoo. Nature isn’t on tap whenever you want it and the rarest of species are rare for a reason – they can move like smoke and they go out of their way to avoid people! Even though I have never done a safari without seeing elegant or some large game, our experiences have become so much more than just showing people a big cat or huge beast – they encompass the wilderness as a whole. 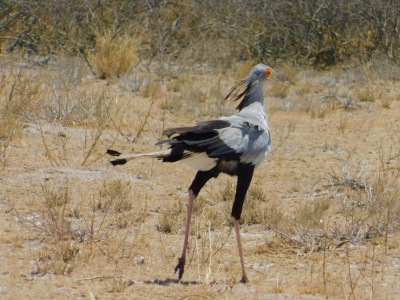 We’ve often found that the people who expect very little, normally get to see the most outrageously wild things. If all you want to do is see a leopard with cubs, a feasting lion, an elephant giving birth, or a cheetah you can stroke, go find it somewhere that stocks it. You can spend years in the actual wild and never see it. If animals were all as extraverted as we’d like them to be, they’d be dead.

This visit to the CKGR was our most unusual. Bjorn and I have witnessed plenty of varying terrain, weather, and curious geographical structures out in the wild and for us, it’s difficult to have an idle mind when there is so much to be intrigued by. Every day, is absolutely a school day!

We trundled into the sands and shrub, past desolate salt pans and sporadic gatherings of trees; we reminded ourselves from the information we gained upon official entry, that we are the only people camping in an area larger than Switzerland!

This time, there was an eery stillness in the air. As if the land was heavy breathing. A stuffy clump of humidity clung to the weighted environment like it was struggling to push an over-tired sumo wrestler in a wheelbarrow with a flat tyre. The ooze of sweat from Mother Nature’s body, as the desert uncomfortably urged itself to roll over, was imminent. The wild was about to get wilder.

A rarity in the Kalahari and often violent, the skies opened just as we began pitching camp. Soaked through in a matter of seconds, we still managed to get the tarps up, the tents, get a fire going and have some coffee within fifteen minutes. I think our guest was mildly impressed. The sun began to set. The lighting in the dark was dry and silent, but it soon became apparent that we were going to be in eye of the storm as the light show came closer and closer, the ground appeared to tense in the mustiness of dusk, readying itself for a soaking, and the horizon became a flashing rave of lightning bolts and strobes. Apart from under our strapped-up tarps and strengthened tents, there was nowhere to hide from what was coming.

The storm raged the entire night. Thunder clapped and rumbled and it felt like the ground was moving. Lightning lit up the tent as if repeatedly flicking the torch switch. Although on edge, I assumed we were safe. I fell asleep in seconds. The lightning was insistent and when the rains finally gushed from above, there was the inevitable concern that we’d forgotten to make something safe, put it under cover or tie something down.

Bjorn and I hurried around in the cold rain, untying and rescuing the tarps from the trees. We may trust our knots, and in fact the trees to still be there in the morning, but why take the risk when you can get a free cold shower in the dark wilderness in the middle of storm? The possibility of voyeur-lions was high, but who wants to hunt in a lightning rave and a scary skyfall? At least that is what we told each other as we displayed enough balls to make them think twice. We made sure we still had all our equipment-to-hand in the morning. 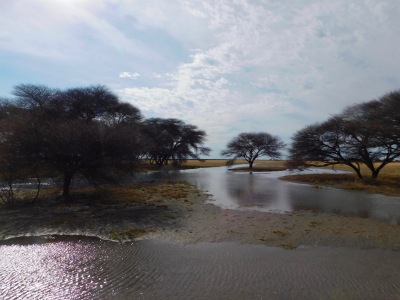 Just incase anyone is wondering if we are naive enough to be carefree about predators and big game interfering with us in the night while we urgently deal with equipment; we always have eyes, torches, and plenty of communication as to whats going on around us.  This storm was exceptional and drastic, nothing could be left to chance. Doubling down on our ropes, making sure all hatches are battened and securing things for the morning was as vital as it was to make sure everyone was safe from curious night-eyes. There are many challenges in the wild and a storm is to be respected just as much as the things hidden within it. Neither must mean anyone should become an easy target, and if anyone should, it certainly isn’t our guests. If it’s a decision between people and our equipment, it’s a very, very easy decision to make.

The morning was glorious. All our equipment was alive and well. The chill in the air with the dew on the ground made the desert a completely different place to the humid afternoon before. I even took a refreshing drink from one of the multiple puddles that had swollen in the night (with a filter, obviously). We were privileged to see this landscape in such a state. Only every few years do some of the flowers and cacti bloom. 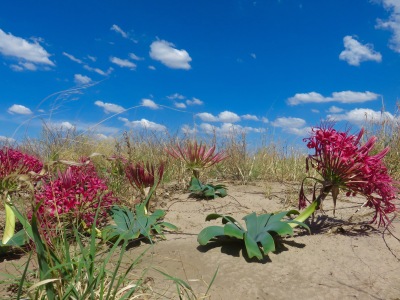 The desert had come to life in a matter of hours. Dormant flora had been waiting for the sky to give its consent, to have the dry and sandy boot taken off its gasping throat for a few special days to be allowed to breath and flourish. It filled the bush with colourful and striking relief. We drove out of camp through the flooded terrain and saw foliage and greenery which might only appear hear again in four years time. 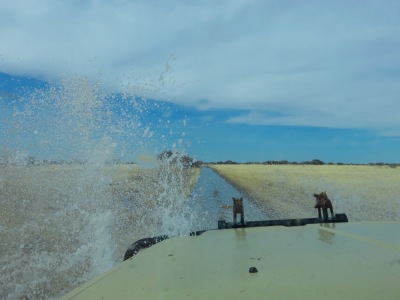 Dealing with the storm made it all the more impressive, humbling and worthwhile. It isn’t often I get excited about flowers…and although the desert still felt remote and vast, the morning was cold and there was a sense of gorgeous, soaked and fruitful familiarity.