“The best beer I’ve tasted this side of the Rockies” that’s me, quoting myself. The 49th State Brewery, just off Parks Highway in Healy (north of Denali National Park and Preserve) was good enough to check twice, and just to confirm my thoughts, a third time in as many days. If you enjoy beer, you should visit and put the chef to the test too. It’s well worth it.

Another reason to visit, is for a reminder of the tragic tale (spoiler alert) of Alexander McCandless. Sitting as a monument and as a tourist attraction in the brewery’s garden, is the bus which was used in the movie “Into the Wild”. The actual location where McCandless was found on the outskirts of the Park Preserve, beyond the end of Stampede Road, is a modern pilgrimage site for many travellers that have come to love the story. To visit Denali and not be aware of at least the gist of Alex’s story is like visiting the (English) Lake District, unaware that it was where Beatrix Potter lived to be inspired to write all of her creature-based children’s tales. Into the Wild, however it is interpreted, is now a true household fable.

Like so many tourists, we spent a morning driving to where McCandless was last seen alive. Although a busy nostalgic route, our timing as usual meant we had the potholed dirt road to ourselves. KP and I have discussed McCandless’ tale on more than one occasion and admittedly, without wanting to replicate McCandless’ desire to leave civilisation behind completely, his story was influential in my decision to spend six months exploring and travelling across the USA last year with only $6 a day. It did not drive me to seek isolation however, more so compound the idea that even though I wanted to accomplish something by myself, being alone forever is not my ideal. Delving deeper into the discussion and being here has shed more light on McCandless’ wild time. Although romanticised by Jon Krakauer’s book written from McCandless’ diary notes, his fame has caused much anguish. Since the release of the film, the number of emergency/rescue call outs in the area has tripled, all due to people attempting and failing to make the pilgrimage to McCandless’ known camp. The river on route is particularly treacherous and it is detailed in the book as the reason McCandless could not walk out of camp when he needed help. In 2013 one Swiss tourist sealed her own fate by trying to cross the river and since then locals are still debating on how to handle the numbers which wish to visit McCandless’s “Magic Bus” site. Some think building a bridge over the river would make it safer, but at the other end of the spectrum locals want to deter visitors altogether. They feel strongly to want to burn anything and everything that remains at the site (trinkets have also been left), removing all trace of the location. McCandless was only a few miles from the end of Stampede Road (and the entire trail now is only roughly 20 miles), but the land which he ventured into is far from merciful. Irrespective of the wilderness which lustfully conjures romantic notions in many fans of McCandless, locals don’t see the tale as Krakauer does. Alex is quickly labeled as selfish, unprepared, foolish, naive, and was certainly no modern hero. It’s no secret that McCandles was carrying scars from his childhood, from his abusive and torturous family life and from a tormenting and often violent father figure. Like many people, he seeked answers and peace in both the wild, and in solitude. 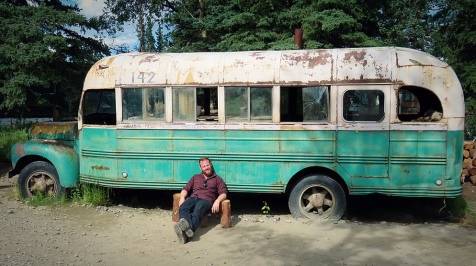 For me, the story helped to find the determination I needed to accomplish what I did last year. Seeing the bus (even though just a movie prop as the original has been pillaged to death) was moving. I’m not normally the least bit emotional about a tourist photo stop, especially one in the beer garden of a brewery. However, what it seems to stand for, and what I can only assume what it must have meant to Alex, is home. This decrepit and rusty bus was all he needed, when he needed it most. No longer escapism, but finally home. To understand McCandless’ story is one thing, to judge him is another. I have no desire to try to live completely alone in the wilderness, but adventures are so much more fulfilling, when your environment and surroundings are altered – to somewhere far beyond your comfort zone. Unlike Alex, and to dispel what I get asked often; I’m not running from anywhere. I realise I am home around certain people and in multiple familiar places. I just don’t need the same, solid four walls around me daily to be either safe, or happy.

Whichever angle you see Alex’s story from, the facts are clear. A troubled, enthusiastic young man ventured into the Alaskan wilderness, and died. What his death accomplished, he will never know, but from his diaries, we know he died a lonely, sad death.

It’s not hard to understand why the tragedy of “Into the Wild” has captured and inspired the minds of so many. It’s a reflective piece of one man escaping to nature to run from his demons, and find enlightenment.

McCandless is portrayed as a hero in Krakauer’s book but had he survived, there would be no story, and this update wouldn’t exist. I might also not have accomplished my own story last year, or conjured the opportunities which I were created from it. On one hand, I both romanticise and understand the controversy around the tale, but on the other, like every single one of us, I find him simply human.